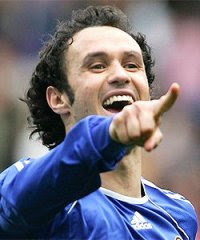 This is almost certainly Carvalho's final appearance on the list and he was only still included because I thought, someone who once upon a time, for some period at least, probably was the best defender in the world, deserved one last chance. It's possible he would have received that chance (to play) had he switched clubs, but he decided to stay instead, even though Mourinho had made it very clear he wouldn't feature anymore, and continue to collect his very healthy pay check. Not that I blame him at all. That would be absurd. In many ways it's just Real Madrid here, paying up for what can sometimes be a negative consequence of Mourinho's win-now, ignore the long-term, mentality They invested in a proven veteran with his best years behind him, and even though Carvalho did contribute some before he fell off a cliff this season, I think it's to say they could have invested a lot better.

At his best, which I at least touch upon in the 2009/10 ramble down below, Carvalho had the pace in his legs and superb defensive instincts to defend impressive amount of space, whether it was pushing up (or for that matter recovering tracking back if that was needed) in a higher defensive line making superbly timed interventions or playing garbage man in the box. Basically he was both a great pro-active defender with the ability to be a cornerstone in a more aggressive team-defense as well as hold his own very well being more reactive in and around the box, which in England, with many teams playing very direct, and more long balls, is of substantial value.
He also had what I would describe as glue-like Ciro Ferrara agility and strength in his man-marking  and during his best years for Porto and Chelsea few defenders shut attackers more effectively out of a game than Carvalho.

As his ranking-history would also suggest every year, injuries and age, haven taken their toll and kept removing some of that very ability and then sadly in 2011/12 we saw the culmination where he just looked like he had totally lost everything and was a disaster waiting to happen virtually every minute of play.

The long awaited final shared ranking sees perhaps the two most gifted central defenders come together. At their best they're probably still the best at their position, but especially for Ferdinand bad health this season has meant that he just hasn't been able to contribute like the final remaining defenders ahead of him.

Carvalho has played more, yet not nearly as much as for an example his partner in the Chelsea defense. I also think Carvalho when playing, unlike Ferdinand mostly, is showing a little bit of decline from his previous lofty standards.

Their respective gifts are of course very different. Ferdinand can dominate like few others with his great physique and if at close range man-marking the opponent, he can be close to untouchable. Both on the ground and in the air. A testament of this is his seemingly non existent need to foul. He hasn't played many times this season, he has only featured in 13 Premier League games, but quite unbelievably in those he has only committed 2(!) fouls and in the previous two seasons only 13 in 24 and 35 games respectively. I tried looking at different good centrebacks and no one really came close to that tally. Committing the least fouls isn't the be all of being a great central defender and other factors are involved, just like with all stats in football, but it does say something at least, and if no one at the moment is even close it does strengthen Ferdinand's case as the best defender in the world when healthy.

Interestingly the closest I could find (didn't look that hard it has to be said) were Daniel Agger and Kolo Toure who also have had seasons with very few fouls. Toure with 17, 23 and 15 in at least 40 games the last three seasons. There is also Pique who in La Liga this season only committed very few fouls (15 in 29) but still averaged more than one per game last season and in the Champions League as well the last couple of years.

Ferdinand is of course also known for his sound technique and right from an early age taking that very much needed aspect for the modern defender to new standards for British centrebacks.

For Carvalho who's athletic ability definitely shouldn't be underestimated just cause he isn't big and strong like Ferdinand, but more than anything with Carvalho it's perhaps the best defensive instincts in the game that makes him so good. At his best he has close to flawless positioning, whether it's pushing up perfectly timing a defensive intervention or if it's staying back sticking, stylewise if anything, like great Italian catenaccio stoppers of the past to the attacker like he is human glue. More than any current defender he just glues his whole body almost to the attacking players doing anything needed to prevent opposition chances. At his best he always reminded me of my favorite Juventus defender Ciro Ferrara.

My only fear for Carvalho and why he is down here with Ferdinand despite playing more games is that sometimes he will overestimate agility and pace that perhaps isn't quite what it used to be and sometimes gamble a little bit too much. It's still rare though, but it happens.

It should also be noted that Carvalho also has very good technique with a good range of passing and good control when he is occasionally going forward.

Mourinho's favorite defender has joined up with his former manager at Real Madrid and in London they miss him.
Indsendt af Stefan kl. 04.43