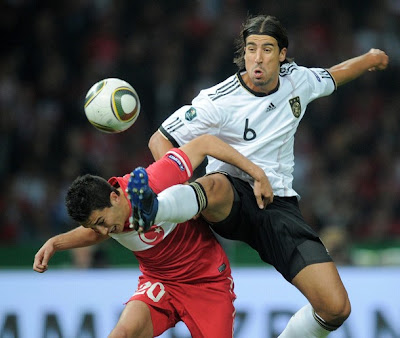 If anyone thought Real Madrid would be too big a step for Khedira, maybe resulting in bench-time, think again.

I first noticed him when he captained Germany to the U-21 European Championship in 2009 in Sweden, and of course not just Khedira, but quite a few others on that team, would go on to do very well for Germany at the World Cup just a year later.

And not to get sidetracked but German football as a whole seems to be absolutely flooded with quality young players. Maybe comparable to Spain for much of the 2000s and a little before that (and during to be fair) France as well.

In the Bundesliga I didn't really catch Khedira's team Stuttgart enough but especially eye catching was a performance in the opener against then defending champions Wolfsburg where his forwards runs from midfield were very impressive while he remained solid in his defensive duties.

Then at the World Cup he looked to have become even stronger, powerful actually, and together with converted central midfielder Schweinsteiger made up one of the very best central midfield tandems in the tournament. Both of them contributing both ways. Schweinsteiger with very good distribution and Khedira, though his other assets shouldn't be discounted, mostly with great running.

At Madrid it's of course up to many other players than Khedira to make attacking contributions so he is completely overshadowed there by other players, but don't underestimate his very solid play and where it helps create balance and control over most opponents.

Even moreso than on the Germany team, at Real Madrid, it's his midfield partner that does the excellent ball distribution, but Khedira is a pretty good passer in hos own right, with good decision making and just someone I think who shows strong tactical play in all his actions on the field. Passing, positioning, running. No wonder Mourinho wanted him.

Personally I would like to maybe see him at some point in a role where he could really show his great two-way play. For Real Madrid too. I really do think there is Frank Lampard potential in Khedira and I wouldn't be surprised if Mourinho sees that too. Real Madrid just has so many excellent technical and pacy players that there is no reason not to make that the focal point of attack.

No matter what though, Khedira's mistake-free play in just about all areas coupled with his strong physical attributes, should mean that he is here to stay among the best midfielders in the world.
Indsendt af Stefan kl. 04.16