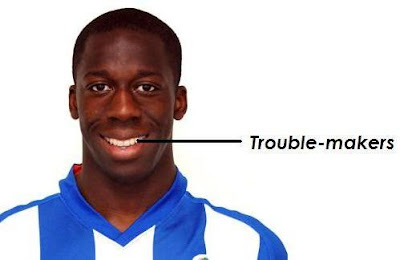 Could have been joined Milan this season where he had signed a pre-contract but some kind of problem with his teeth, that I'm too lazy to look up now, meant that he failed the medical.
Too bad for Milan, congratulations Lyon, is the popular conclusion that it's hard to disagree with.

Cissokho 22 has had something of a meteoric rise from one club and on to the bigger.

20 games for a French third division side before being snapped up Vitoria Setubal in the Portuguese first division and there it only took 13 games before the dominant team in Portugal in recent years, champions FC Porto signed him.
There when everyone (including me) got to see him playing in the Champions League, everyone got kinda interested and the transfer rumors could begin.
Just 13 games was his finishing total for FC Porto before Lyon stepped in and put to good use some of all that money they received in the Benzema transfer and signed Cissokho for around €15 million+20 percent of his next transfer fee.

After that little summarization of Cissokho's young career so far, it almost goes without saying that he is someone who's talent is very obvious and immediate when you first see him.
He is very athletic and strong technically. Man to man defensively he is a beast (and looking at his build he can get even stronger) and on the offensive he is fast enough and skilled enough to make good deliveries and can be pretty hard to stop if he gets into full gear, resembling a winger.
I'm actually surprised he is listed as only 1.83 cm. He seems even taller to me. Maybe it's the lanky build and long legs.

Cissokho really isn't that experienced on the highest level yet but to call him a raw talent or anything like that would be insulting and indicate holes and weaknesses that I'm just not seeing.
There really isn't anything not to like here and it's scary to think that with experience he'll get even better.

He is yet to make his debut for France but has found his way into the squad recently where on his position higher ranked Patrice Evra is the clear first choice.
Personally I think he is a better left-back than likely rival Abidal but Abidal does have versatility going for him. Another French left-back Gael Clichy cause of injuries and poor form (mostly defensively-he is good going forward) is way behind when it comes to going to the World Cup I think but who knows with Domenech.
If Benoit Tremoulinas of champions Bordeaux is even an outsider I don't know, but he is someone who has been been playing great lately, so who knows.

Ranked too high originally I'm getting pretty sure.

I will have to pay closer attention to him soon, but ever since some eye catching performances for Porto in the Champions League and early on for Lyon, I haven't, rightly or wrongly, seen anything overly impressive.

Good fullback, someone still with a lot of upside, but just not sure how special he is currently.
Indsendt af Stefan kl. 22.06