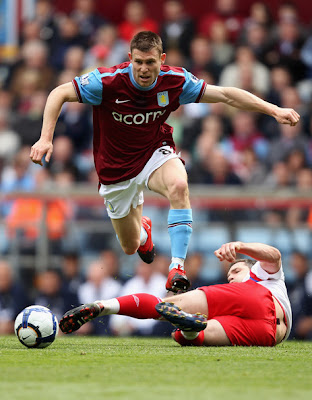 Milner is a very versatile and complete midfielder able to play left,right and central who is strong both physically and technique wise.

He has the kind of range to his passing meaning that whether playing as a winger, where many players are far more flashy, but less effective, or as a central midfielder, he is virtually a guarantee to assist goals.

Even though he is capable when it comes to dribbling and has pace to be a transition threat into open space, there are of course wingers who are more gifted in those areas, but Milner uses his technique intelligently and with the way he can kick the ball often doesn't need any time, or to create much space for himself at all, in order to make good deliveries.

He is also good on set pieces.

Milner has fantastic work-rate and is reliable defensively. Not only covering his wing but there also is enough rugby-like robustness to his physique that he can battle his ground centrally as well. How many good wingers can make THAT claim? And overall his team-work is intelligent and exemplary.

There is a lot to like about Milner. Not least for his coaches.

Fans on the other hand he has a tendency to leave wanting a lot more.

For his new club City I think the problem is that the one very good thing he has to offer when it comes to attacking play, his sharp deliveries, they don't really have the best conditions to come forward at this particular team.
In fact I don't think it's really part of City's attacking play and neither should it be when players like Silva and Tevez prefer a different kind of build up and among the central midfielders, the prime attacking threat there, Yaya Toure, also prefer the through balls.

Without great pace or dribbling on the wing it's not like Milner can afford to wait kicking the ball either if he wants to create and that would result in not least Tevez and Silva not seeing enough of the ball where they're dangerous. These are just very different players to complement than what was around him at Martin O'Neill' very direct Aston Villa team.

To complete the misery Milner isn't fast enough either to be the kind of transition threat that you associate with a winger on an excellent team.

That leaves the solid contributions from him in the form of tireless workrate and teamwork but you just feel that for this team that would be better suited central. From there he could also start counter attacks rather than slow them down.

City of course have a very strong squad and Milner does seem to have lost his place on the wing in the first choice lineup to make room for better attacking players such as the trident of Silva, Tevez and Balotelli.

Exciting winger Adam Johnson should be first reserve there I think while Milner hopefully will continue to improve as a central midfielder. That's where I think his future lies on this level and down the line with his versatility he could be a great fit in the Mancini preferred three-men central-midfields.
Indsendt af Stefan kl. 05.19