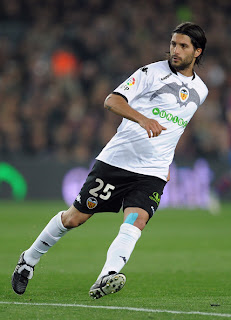 2009 footballer of the year in Russia made his move to Valencia in January but competing for not least David Villa and Silva's spots he predictably saw limited playing time.

If there was any chance of that limited playing time being permanent though I'd have a hard time understanding why he chose Valencia over the many other clubs interested, he was a free transfer, but I have feeling he was promised a scenario, next season the earliest, where at least one of Villa/Silva would be sold.

Now of course with David Villa making his move to Barcelona the door is certainly more open but Dominguez, despite his many goals, isn't really a striker so more than anyone else, Villa leaving, in the status quo should benefit first of all Nikola Zigic who might just explode next season if really given the chance and the rest of the service remains, whereas Dominguez is still more in competition with Silva and to some extent Mata.
Of course lineups with all three of them are definitely possible plus intriguing and of course one of Silva and Mata might very well still be sold. Especially with Valencia's interesting financial situation in mind.

When we do see more of Dominguez we'll see a very skilled technical player who has great control, pace, who can dribble. Has balance. A player capable of great first touch passes, and good passing in general, and who is a very good finisher.

Overall someone who as an attacking player pretty much has it all but unfortunately at Valencia found himself behind a couple of stars who did most of these things even better.

Make no mistake about it though Dominguez definitely has completeness to his game and can even defend relatively well as we saw when Rubin Kazan beat Barcelona at Camp Nou and against Inter as well.
Dominguez defended his forward position exemplary when Barca was in possession (all the time) and then with his pace and skill was a great threat the other way, crowning his performance by setting up the winner with perfect transition play.

Obviously Dominguez is another Russian Premier League star who I only saw when his clubs played in Europe. Therefore I could definitely be wrong about just how good he is but with likely many starts for Valencia next season, I wouldn't be surprised at all if his play makes a good case for an even higher ranking.

In the new season it still just hasn't happened for Chori at Valencia.

They lost some stars but also added depth. Most of that depth has performed better than Dominguez and he finds himself on coach Emery's more marginal rotation spots and not least plummeting down my list.

The only positive right now for Dominguez is Emery's great belief in rotation and therefore his opportunities haven't died out completely. But he better get going the next time a chance presents itself.

Dominquez did indeed get more chances and yesterday played perhaps his best game in the Valencia shirt drawing 1-1 at Old Trafford.

Unfortunately the immediate reward was getting injured and he was forced to exit during the second half.
Indsendt af Stefan kl. 04.53