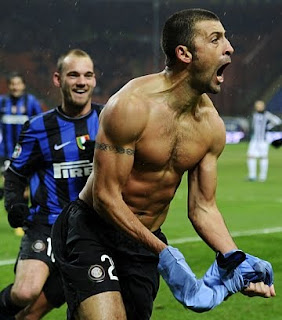 Samuel is another central defender who has struggled with injuries in recent years but ever since his Roma days where he was a key player in winning a historic Scudetto I've always felt he was one of the best defenders in the world.
He is still plagued by nagging injuries here and there but when he plays, and certainly this season it's been at a consistently high level and I think he deserves to be the highest central defender so far on the list.

In my eyes - ability wise (unlike Nesta) he's seen very little decline, if any at all, other than health, and while not as talented an all around player as some of the earlier ranked defenders, his actual defensive attributes are right up there with the best and it's my impression that there just isn't the occasional mistakes that you see from some of the other excellent defenders ranked so far. He is just a little bit more solid and that's what has put him ahead of the pack, though it's obviously very close.

He is less talented than the likes of Mexes, Pepe, Kolo Toure, Gallas and Zapata but perhaps stronger than all of them, even better or their equal in the air and he makes less mistakes.

His current Inter partner Lucio is at least as strong and better technically (it's very possible he was ranked too low and more or less a victim of Pepe being ranked as low who I definitely felt was ahead of him) but I think Samuel is the better pure defender with more secure marking and no risk taking. Plus more agile and even though he certainly isn't fast not as painfully slow as Lucio is these days on the first meters.

The most comparable central defender in many ways so far is Bruno Alves but here I give the edge to Samuel based on the level of competition faced in Italy and Spain over the years versus the Portuguese league.
Indsendt af Stefan kl. 22.11