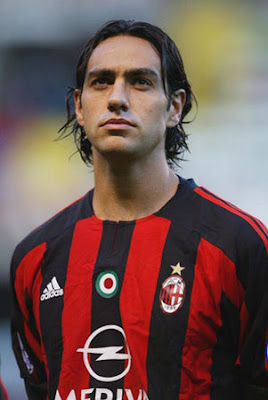 At least the best that I've ever seen.

I guess there are a few I can think who could rival his marking and defensive instincts, Fabio Cannavaro and Ciro Ferrara (maybe the best pure man marker, then later adapted great to zone) come to mind, but then Nesta had size and strength (stronger than Jurgen Kohler who is another that come to mind) that they didn't have, as well as all the defensive ability and instincts you could ever imagine. He even rivals their superb agility and Cannavaro's great range of command and he was much better with the ball.
There is also Maldini of course but he was at his greatest at left-back. Thuram is another favorite of mine who deserves mention.

Before the injuries causing him to miss whole seasons in recent years, there were simply no one better than Nesta. For Lazio and early Milan, as well as the Azzurri where his luck has been brutal, following in the unfortunate footsteps of Ferrera, getting injured in 3 World Cups, he was immense and amazing to watch, putting on display after display of flawless defending.

This season surprisingly he's back playing. I honestly thought his career was over and from what I've read it was close.

He is 33 and with a physique, though thankfully not broken, still not nearly capable of what it used to athletically.

Still he's been doing an admirable job on a Milan team currently with a very attacking balance that sees microscopic defensive help from the midfield.

If it wasn't for Nesta with all the ability that remains often holding things together with his partner the talented Silva in and around the penalty area against opponents with a wide open highway towards it, who knows where they'd be in the table? Would rookie coach Leonardo still have his job?

His play has been so impressive that there's been plenty of talk of a comeback to the national team where he's been retired for years now but the latest is that he's turned down that chance.

Staying healthy I'm sure is a big part of that decision and so far he's managed to do just that and while he is definitely not the best defender in the world anymore, he is still kinda up there when healthy, and almost for the glimpses alone that he gives you, of the immense defender that used to rule air and ground, for those alone Nesta just has to be on the list.

There were, and remain, health issues a lot of the time, but he has avoided any major (at this stage probably career ending) injuries and managed 32 games in 09/10 and going on 19 so far this season.

He has definitely lost more than a step compared to his prime which is understandable with all the injuries. I think it's even resulting in a few mistakes occasionally (after all this time though it's still kind of shocking when it happens which I think says something) but he always plays at a high level and for what looks to be a more well balanced Milan side under coach Allegri there should be less pressure on both him as well as fast emerging partner Silva to perform saves and absorb pressure in the box.

One thing to look for is how high (or not so high) a defensive line Milan will play in various games in their new 4-3-1-2 system.

Before Ronaldinho was put on the bench, part of Allegri's cure to somehow make the Leonardo 4-3-3 function was to play higher up the pitch but it didn't look like many of the aging Milan players were all that comfortable doing that.

Without Ronaldinho though and better pressing in this new system, before it was almost non existent, there seems to finally be decent balance in place.

That added to the individual quality of not least what's up front, but to a lesser extent what remains in midfield and defense too, it looks like it will be enough to finally win a Scudetto again.

There is still a long way to go of course and I'm sure I'll be touching on Milan plenty in the updates of their various players on the list. So stay tuned!
Indsendt af Stefan kl. 22.02