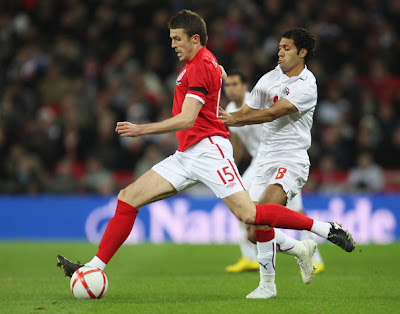 A player who on the surface rarely looks impressive and because of it is seldom held in high esteem by most fans.

You could even say that many of his attributes are pretty ordinary. Especially those that would make a good attacking midfielder which he just isn't anymore, at least not for a very good team.

He just doesn't have pace or good enough control to be consistently effective in the final third and in one of the more unexpected recent turn of events has in my opinion been surpassed there by midfield partner Fletcher who these days looks better going forward than Carrick.

But what Carrick does have is actual deep lying playmaking ability, a great range of passing and especially when that is combined with a strong physical presence, which Carrick has become, then you have a very valuable player.

Martin Jol put it rather simply this way: Michael's biggest quality is to move play from defense to attack and win the ball. Because of him, other players play better.

I think since those words were spoken Carrick has become, maybe even much better defensively, and he has a lot of responsibility there, creating the situation where all of Carrick's best work, the defensive, but rather uniquely for a British player I think, also the attacking contributions takes place further back, often in the defensive midfield.
Especially on a team like Manchester United who'll mostly control inferior opponents. That is just not very eye catching compared to where a lot of the game takes place, in the opponent final third, so I feel Carrick's contributions further back are terribly overlooked and sometimes ironically even completely forgotten the first mistake or sign of inadequateness he'll make whenever venturing forward.

There is just something potentially extremely valuable in a player who can make a good attacking contribution as far away from the opponent goal as possible. He doesn't even have to go forward to contribute thereby not compromising the defense. It's just a great risk reward scenario best exemplified with a player like Andrea Pirlo who by doing that to perfection became the most important player on Champions League and World Cup winning teams.

Carrick doesn't have anywhere near Pirlo's other technical skills, restricting him much more to play deep or get exposed, and from there isn't even as good a passer but he is gifted in very important (you could say tactical) areas nonetheless, defensive work (better than Pirlo)+range of passing, off the ball movement being a consistent passing option and while it might not be the great difference maker day in and day out in your average Premier League fixture, just like Pirlo not seldom wasn't in your average Serie A game, against x-defensive opponent, in certain games against certain opponents Carrick with his skill-set can be the most valuable player on what is a very good team, playing at the highest level, for that he deserves credit.
Indsendt af Stefan kl. 05.01