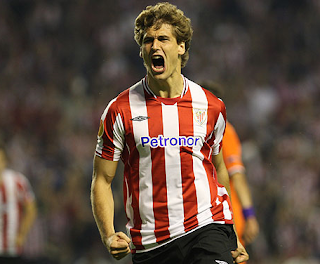 The tall target-men type of strikers almost have their own internal ranking going on this list and Llorente hereby is the highest entry so far.

He shares qualities with the others when it comes to strength and aerial ability but what makes him the current leader is that I think he has a little bit more acceleration and pace than the others ranked so far at least potentially making him more of a goal scorer able to better get in front of defenders compared to the other ranked big men.
Having said that I do suspect Zigic is the best goalscorer of all the +190 cm guys (Huntelaar btw is 186) ranked so far, not cause he isn't the slowest out of everyone, he certainly is, just because potentially he is so dominant head and shoulders above virtually anyone, but of course Zigic just isn't playing much, which is a shame.

Technically someone like Pogrebnyak is even better than Llorente when it comes to passing and probably ball control but Llorente is good for his type of player. From the typical position of having his back to the goal he is even able to make good turns and get decent shots in. Better than those ranked so far. Also in his favor when comparing to some of the others is that at 25 years of age he has now been very consistent at a high level basically 3 years in a row now playing in a strong league.
And that with the substantial burden on his shoulders of leading the attack for all Basque Athletico Bilbao. He is also having maybe his best season, if he can keep it up he has an excellent case for a better placing, though I'm not sure if that's a symptom of him or the club improving. Some kind of combination of the two is the most likely I guess. Anyway, no matter what it's not a bad thing.

With 5 recent caps for Spain Llorente is a candidate for the World Cup but of course face very strong competition and will have quite a few Spanish strikers ranked ahead of him on this list. And then there is the absurd number of attacking midfield candidates likely tempting Spain coach Del Bosque to select one less striker.

What Llorente does have going for him though is that he does at least offer something different compared to the others but then again just how much of a need is there for that on current Spain? Probably not a whole lot but I do think it's possible at least that he could still steal the spot from the guy who also just happens to be the next (but ranked quite a few places higher) Spanish striker on this list. At least of those even in the picture (oops potential spoiler)! We shall see.

I've come to appreciate Llorente a lot more since that original writeup and I think I seriously underrated his abilities that I should never have mentioned in the same breath as some of the people I go on to mention. People, I should say in my defense, that I did have him ahead of in my rankings...

Anyway this is a very good striker. One who is more skilled, stronger, smarter and quicker than I thought a year or so ago.
Indsendt af Stefan kl. 22.19