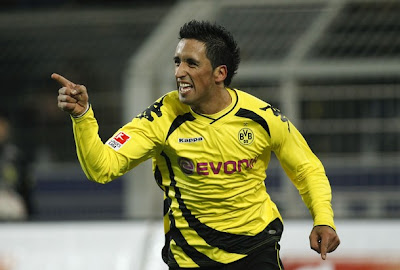 It's interesting reading the 2010 thoughts below. I was obviously extremely high on Barrios at this point and he looked he would be able lead Dortmund in the goalscoring department for as long as they could keep him, well enter the present, where following barely playing or scoring for quite some time now, he is way off to a nice fat paycheck and irrelevancy in China, and of course less important, also well on his way out of my list.

In many ways it's a startling example of just how much an injury can change different players fortunes and paths so let's go back a little: Barrios following a fantastic 2010/11 season with Dortmund is now in the Copa America final with Paraguay facing Uruguay.
He is not starting, partly because Paraguay is playing insanely defensive at this point and partly because the long season is beginning to really take its toll and he is struggling with his fitness.

When he enters the game in the 77 minute Uruguay is ahead 2-0, has been well in control and at this point actually dominating (as I remember it, creating one chance after another) a Paraguay team finally forced to open up and come forward. And Barrios? Right after making his first sprint, he pulls up, clearly injured and unable to continue.

It was already clear at that point that it would ruin his pre-season, very likely the start of the 11/12 season as well, and while things got even worse and he would later suffer relapses, his replacement Lewandowski took as full advantage as he could possibly dream of and on the opposite end of the scale Barrios fear, scoring and playing as well as Barrios ever did, and while he didn't do it with the finesse Barrios would do at times, the physicality he brought to the team not least materializing itself in terms of work-rate and general team-work would eventually surpass everything Barrios ever did.   As would his current 44th ranking of course but more on Lewandowski when his profile comes up.

Barrios even when returning to fitness was now relegated to brief appearances here and there, as Klopp continued to ride the Lewandowski horse on the way to another Dortmund Bundesliga title.

Lucas Barrios has some of the best movement without the ball of any current striker and creates space for himself or for teammates. He is very tricky to mark effectively over the course of 90 minutes.

He has very goodwork rate, good pace and as a nice example of just how good the best strikers are these days, as the notorious goalscorer that he is (49 goals in 53 games for previous club Colo Colo), he also brings efficient teamwork complementing the players around him. Whether it's applying ball pressure or unselfishly and intelligently finding teammates with his finesse link up play.

For Dortmund who has stormed to the top of the Bundesliga (becoming Herbstmeister with three games still to go) he probably isn't quite as important as Sahin performing midfield masterclasses so far this season, Barrios backup Lewandowski looks good too, but in order to prevent the risk of all (or just some of) coach Klopp's tactical effectiveness through pressing, movement and passing go to waste where it really matters in the final third, having someone like Barrios operate there capable of taking it to the next level with his skill, on and off the ball, and in the process perhaps lifting the level of quite a few (very young) people around him, is a very good thing indeed and exactly what's needed to keep the point collecting going at its championship rate.

A good example I think as Dortmund suffer their only second defeat losing 1-0 to Frankfurt.

Barrios wasn't at his best in this game and while Sahin as usual conducted further behind, including some fantastic deep passes to get trademark Dortmund transition going, and the running and energy from just about everyone was as good as you could expect after playing Europa League midweek, Barrios however missing his first game of the season early December with a knee injury and perhaps having played a little bit too much following that, looked weaker than usual, losing balls that he normally wouldn't, playing with less energy getting less involved and when he finally was, he missed some very good chances. To rub salt in the wound, following the biggest, Frankfurt (via pro-goal-getter Gekas) go on to score the winner in the other end.

There is a fine line between, even great success, and failure sometimes. All it took here I think was key player below what is his normal level.
Indsendt af Stefan kl. 03.46