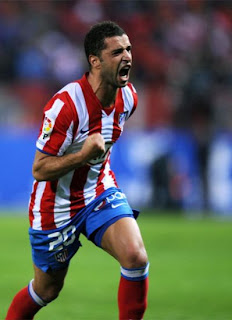 Simao has been one of the better wingers in the world for a good part of the last 10 years but whenever a player much reliant on pace has hit 30 years of age and is having his worst season in a while you do wonder if he is starting to slip.

He still looks fast to me though and it could just be another one of those inconsistent spells that has plagued him for most of his career and I guess prevented him from reaching the very elite. We'll know soon enough anyway and obviously no matter what he will have far from 10 more years left as one of the better wingers around.

When at his best he is still fast, skillful and able to create for himself and others (passing and shooting), not just on either wing but in most of the attacking midfield area and he was an important part of Atletico's very exciting attack last season, that if it wasn't for Barca's even more spectacular exploits, probably would have received more attention.

He is another small somewhat fragile player that doesn't add much weight defensively. His work rate is good at times (perhaps especially for the national team) but even in the typical 4-2-3-1 systems where he has usually roamed protection from "only" two defensive midfielders haven't always been enough to keep things balanced.

He had a better start to this season I would say but basically until there is some kind of a change, like maybe a significant upgrade in central midfield, this Atletico Madrid team goes as Forlan and Aguero go up top.

When Aguero had some injury trouble after the good start, then soon after Forlan catching some apparent World Cup virus, not just Simao but the whole team struggled.
Indsendt af Stefan kl. 23.51