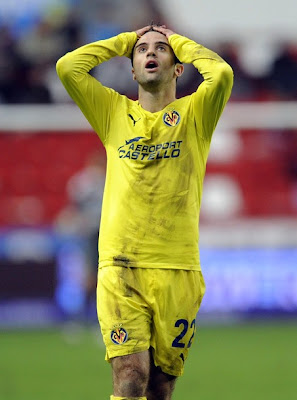 American born Rossi is a very skilled player who not long ago I would have ranked higher, but he's been struggling a bit this season which is perhaps his first bad one in his still young career.

He is a player with excellent technique in most areas. Very good ball control, at times exquisite passing and he has a great shot.

The negatives I think are that he has shown himself pretty limited to a role of second striker.

As a wide forward his effectiveness is too reduced to being around the penalty area, he offers almost nothing further back, and as a main striker he lacks power and maybe some pace plus work rate to really be a serious goalscoring threat without a partner that he can cooperate closely with through his great technique.

Without the ball he has never quite become good enough and often falls through on the work that's needed in both of these positions, if we're talking highest level.

Where he is excellent though is in the middle of where things happen in the final third, preferable in a functioning possession game (that could easily be the problem for Villarreal where the standard has really fallen) where he'll get lots of touches. The more the merrier. Then good things happen and even without much space at all he has great ability to be effective whether it's a great pass, shot or dribble.

Villarreal is turning last season upside down. Players like Senna, Cazorla and Rossi who all struggled to such an extent they missed out on what had looked like safe World Cup selections, now, perhaps benefiting from that break, are all (along with other teammates among the 300) playing really well.

Key has also been new coach Juan Carlos Garrido. He was in charge of Villarreal B for several years and he's gone back to the style and tactics of former longterm coach Pelligrini. Tactics and style that still, very much, suits the characteristics of the players.

A lot of slick passing and 4-2-2-2 movement and Rossi with his technical skills fits in like a glove, whether it's being the end of playmaking from Cazorla or Valero or playing finesse one-twos with strike partner Nilmar.

Rossi is in the form of his life and adds both scoring and creativity to a Villarreal team that's putting up a brave case that there is more than just a couple of La Liga teams worth watching.
Indsendt af Stefan kl. 23.04