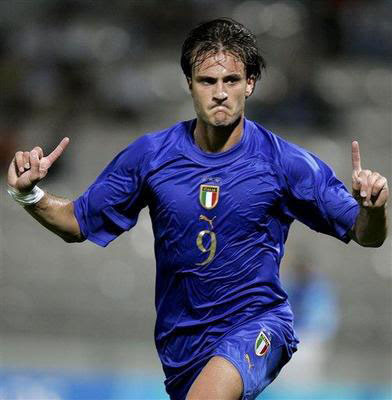 Even during the periods where Gilardino was often criticized for his shortcomings in all things related to technique, including below-par finishing turned into a complex when he was at AC Milan, there was one important area where I always found him very elite; those without the ball perfectly timed runs or cuts of his in between defenders, and rather uniquely not even necessarily when having space or his team in transition, but in the narrowest conditions sometimes, just gliding in between say the fullback and centre-back, finding himself through on goal with a great chance to score.
He needs the pass of course and especially when that's been coming from Andrea Pirlo it has been a thing a beauty, but just because Pirlo is a great passer from deep, do not underestimate the great run which (especially with pass coming from deep I think you can say) is just as important.
It's definitely one of the things I'll be looking forward to see at the World Cup. That connection. If it's still there.

At Fiorentina, Gilardino has still been doing that and in Montilivo back in central midfield he has someone with at least somewhat similar potential for passing, but especially this season with Pazzini gone for good and the final downfall of Adrian Mutu, Gilardino without a strike partner alone up front in mostly 4-2-3-1 has found himself much more playing with his back to the goal, so therefore we have seen less of those runs.

His finishing has improved in recent years though and that way, this season at least, making up for those Gilardino-through-on goal chances perhaps being more rare.

He is also stronger these days with better balance and that combined with improved technique meant that, despite me never really seeing him as a target-man type, that his play also in this area has become pretty impressive, and is possibly a reason that neither Toni or Amauri (other than poor form) were selected for the World Cup.

Always very hard working Gilardino, while Fiorentina was still in the Champions League, was asked to carry a lot in attack and rarely got relief in some tough 3 games every 7-8 days stretches, with Fiorentina simply having no replacements, and he did start to look very unfresh around the time they were unluckily knocked out by Bayern, which then became a major reason for Fiorentina's disappointing league form I think. There just wasn't enough depth for a two front battle which is a real shame cause at times they did show a very high level. But they didn't have enough depth in anyway to sustain it.

Gilardino did however get some rest towards the end, where for Fiorentina there wasn't much to play for anyway, so hopefully he'll be fresh for the World Cup where just like in qualification, where he ended Azzurri top scorer, he'll very likely be the first choice centre-forward.

It's tough going currently for Fiorentina in Serie A where they find themselves fighting for every point they can get in a lot close games.

Gilardino as described above has improved since his Milan days when it comes to technique, strength and teamwork. He does however seem to have lost some quickness that in recent times probably would have served the team better than whatever it is that has improved.

Quite simply with Joveti out for months recovering from knee surgery, Mutu being Mutu more outside than inside the pitch and newcomer Ljajic either not quite there yet or alternatively simply not seeing enough confidence from Prandelli successor Mihajlovic, there really haven't been enough final third quality from Fiorentina to take advantage of the assumed better teamwork from Gilardino.

Mutu has just returned though and it will be interesting if him and Gilardino can re-discover their old spark.
Indsendt af Stefan kl. 05.17