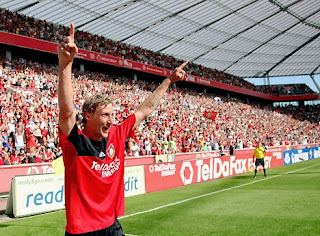 
Patrick Helmes, Leverkusen's top scorer last season has missed most of the season recovering from knee surgery and instead it's been Kiessling who has managed to step into that role, make it his own and become the team's main goal scoring threat. So much so that he is a good candidate to finish as the Bundesliga top scorer.

He is a tall striker who is good in the box and air but also very lanky with good pace.

Most impressive is his Dirk Kuyt like work-rate, he kind of looks like him too, and he offers his teammates constant movement throughout a game anywhere really in the final third.

There is a danger he's being ranked a little too high too early. This is the first season where he has been a consistent goal scoring threat anyway and it's possible he'll revert back to more of a second striker/forward role if Helmes ever finds his form again (very impressive/promising looking Derdiyok will be another obstacle for Helmes) , but still a tall striker with that kind of work-rate and generally impressive team work coupled with decent pace and technical skills I just can't see, in whatever role, not being a very valuable player for years to come.

He only has 3 caps for Germany but been in the squad recently and should make it to the World Cup I think.

The 2009/10 season finished with neither Kiessling or Leverkusen able to maintain their form after the winter break.

Then the start of 2010/11 has been an injury plagued one for Kiessling and he has only played in four games.

He will hope to return strong after the current winter break but will have increased competition to deal with.

Helmes who he used to play second fiddle to has returned from his own injury nightmares and shown he is, if nothing else, still a capable goal-getter and young attacking players like Sidney Sam and Renato Augusto, even if not strikers, are still making strong cases for attacking spots on the team. And of course with that, limiting the number of strikers being played by Heynckes.

There is also Derdiyok of course, who still hasn't quite put it all consistently together but is someone with all the tools that he has in place, can be, and is in my opinion, the best of the Leverkusen bunch.
Indsendt af Stefan kl. 02.18