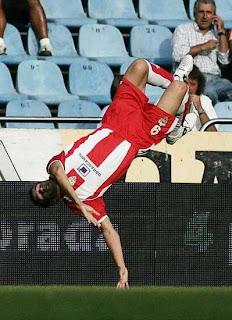 Negredo started this season as he finished the last one, looking like the next superstar striker coming out of Spain.

Then things came to a sudden halt and he has spent most of the time since struggling for his new team Sevilla, and as touched upon in the Frederic Kanoute writeup , just hasn't been able to fill the shoes of either Kanoute or Luis Fabiano, in what's been a poor season for the whole team.

As Sevilla's terrible record without that duo starting suggests I think a lot of it is just how much of the Sevilla style and tactics were based on what those two could do, and while Negredo is very good in his own right, he is a different type and less of the supreme athletic box presence that those two together virtually guaranteed.

Sevilla for the last many years have always had great creativity and pace coming from the wings.
Negredo to really shine it's possible needs a whole different kind of buildup, passes coming more from central, so he can be at his best just inside and around the area where his great technique poses much more of a dangerous threat than trying to meet any kind of passing off the ground whether it's a cross or a target-man type of feed with his back to the goal.
It's possible Negredo can develop those things to his game also but so far I haven't really seen it.

His mostly great play the last two years has also put him in the Spain World Cup picture where there is a never ending battle to be first (and maybe second) reserve to the superstars Fernando Torres and David Villa.

On my ranking Negredo is the highest ranked of the bunch and the one who at his best I think is ahead of the others but certainly Athletic Bilbao powerhouse Llorente who I regret not ranking higher and is playing great this season with his size and strength offer something that the others don't and if only one gets to go (Pedro with his versatility has become pretty much certain) then I think it should be him.

Negredo still looks to have it all but also continues to show inconsistency for Sevilla.

Llorente that I mention at the end of the original writeup will definitely have surpassed him.
Indsendt af Stefan kl. 02.58