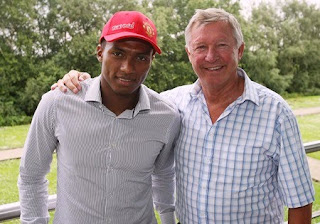 A beast of a winger who's physical tools, strength and pace make him a very dynamic player who is very tough to deal with.

The best description of his technical skills may just be, simple but effective, because while certainly not bad he doesn't have the technical capability of many other good wingers, look no further than flashy teammate Nani for starters, but if you add the balance Valencia possesses, thanks to his strength, even when in full flow going down the right hand side, and then his ability to cross the ball, you have, despite one fottedness even, an extremely effective player. More effective than most flashier wingers.

Then there is his great work rate making him very comfortable in a fast paced (often) high pressure game and I'm sure I'm seeing positional discipline as well, where he is consistently defending his wing, be it via pressure or back tracking, throughout a game and with that providing great value to his team.