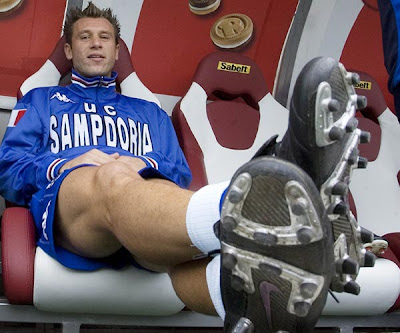 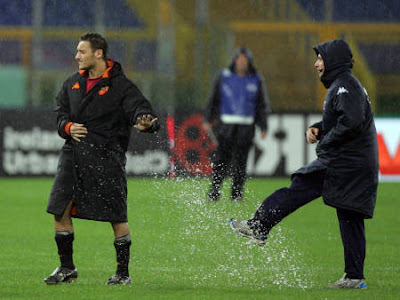 The clown prince and enfant terrible of Calcio has had another tumultuous season of ups and downs, on and off the field.

Amidst a massive media campaign trying to get him called up to the national team Cassano started the season well showing trademark brilliant attacking flair, passes and dribbles, making those voices even stronger, only to, as usual, at the first sign of adversity, self destruct, threaten to quit, and fall out with both fans and coach resulting in him being excluded from the squad and once again the team starting to do better without him.

Here is what I wrote about Cassano in the Sampdoria part of my Serie A preview (one I'd like to improve immensely next time around) before this season:

He is a talented attacking player who is creative with a lot of flair, but also someone who through sheer unprofessionalism throughout his career has been unwilling to even try and improve other areas of his game.
That's why he is playing for a midtable Serie A club and not a big one. European or Italian.

27 years old now having wasted many years of his talent, he does still have time to improve, or mature if you will, but even last season while being praised by the media, there were many games, especially early on, where he didn't even seem fit, slightly overweight like in the Madrid days and when without the ball was probably consistently the worst player on the pitch, hurting his team with his lack of work/movement/effort.

As absurd as it is, while hysterical voices for Cassano being selected for the national team grew louder and louder, his team where he had been made the most important player, was slumping and slumping, flirting with relegation!

This season it looked like deja-vu. After a bright start once again Cassano was bringing the team down with him but Del Neri took the brave decision, left him out and suddenly Sampdoria couldn't stop winning and have been putting my midtable-tag fully to shame and are currently challenging for a Champions League spot.

To both men's credit though, after Del Neri was sort of forced to include Cassano again when striker Pozzi got injured, Sampdoria arguably became even better and has duly continued their winning ways.

Here are some interesting comments from Del Neri on Cassano when he was recalled to the squad and the style of play:

Sampdoria boss Gigi Del Neri claims to have re-built Antonio Cassano after dropping him earlier in the spring.

Interviewed in La Gazzetta dello Sport, Del Neri was asked if it was courageous of him to drop Cassano.

“No, because before I took the decision I thought about it 100 times. We had a problem in attack. We needed more substance and less technique, Pozzi instead of Cassano, someone who helped the team move up the pitch, someone who pressed the opponent.

“Now, things are going better, even if it's not ideal. But in one move of his during the derby I saw the right level of anger. He'll be great when he can move like that more.

“Before Cassano couldn't manage many 30m sprints. When he plays further forward he has to sprint 10m so it's different. The question is: when will he do 30 separate 10m sprints? 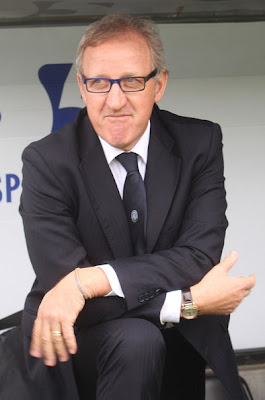 To get the full picture here is what I think is a very comprehensive blog entry from Francesco on the Italian Offside page, where I'm not sure I have much to add at all:

There is little doubt that when Antonio Cassano is in form, he is right up there with Francesco Totti as the most talented player in Italy. His technique and skill is just so sublime at times and he can really give defenders headaches. However, would you say that Cassano is the hardest working player on the pitch? In a short answer: Hell no.

Cassano himself has stated many times that he hates tactics and training and learning tactical schemes and such. He just wants to go on the field and play. Cassano is practically one of those players that is very difficult to place in a restricted tactical scheme, because he is a classic fantasista who just roams the pitch and creates.

In the past Roberto Baggio had trouble with coaches because of this exact reason. Many coaches like Sacchi and Capello didn’t know where to place Baggio in rigid formations like a 4-4-2, because he was neither really a midfielder or a striker, a “9.5″ like some coaches called him (a mix between an traditional number 9 and a traditional number 10).

If you’ve watched Cassano over the past three years, you’ll notice the same thing. While technically he’s a striker, he hasn’t really been a true striker. At Sampdoria he has always played next to another striker (from Montella to Bellucci to Pazzini etc) but placed himself on the left wing and started from there. Very rarely was he anywhere else on the pitch. He would hang out on the left flank, receive the ball, and try and make something happen. That’s basically how he’s been playing the past three years. Added to that, he wouldn’t pressure the defense, and he would never come back and help defend. A real tactician’s nightmare.

Enter into the fold Mr. Luigi Delneri. The same guy that Cassano said he couldn’t understand what the fuck he was saying (from his book). Delneri has played the same formation from his miracle Chievo days. A straight, rigid 4-4-2 that relies heavily on the wing play of the two outside midfielders and the hard work of the two defensive midfielders in the center of the pitch. The two strikers are generally just two out of and out strikers. Seems like no room for a fantasista. However when Delneri was in charge of Atalanta the past two seasons, he had a fantasista on the roster: Cristiano Doni. So Delneri’s 4-4-2 was more of a 4-4-1-1 with Doni supporting Sergio Floccari. But Doni is different from Cassano. Doni is more of a true attacking midfielder that plays in the center. Cassano isn’t this kind of player. So questions arose how Cassano would fit into Delneri’s plans.

Cassano started the season perfectly, showing all of his talent and climbing up the assist charts. However he wasn’t scoring. As much as he was helping others to score goals, he only scored 3 goals up until he was frozen out of the squad back in January. Cassano still attacked from the left flank, and he would always have the ball very far from goal, so he would always pass instead of trying a shot. When Samp started to struggle, Delneri thought it was time to drop Cassano for a while and partner Pazzini with Nicola Pozzi, an out and out striker who would pressure the opposing defense and provide a physical presence.

With Cassano the team won, but slowly realized that they needed quality up front. Cassano was re-integrated into the side and with Pozzi’s injury it meant Delneri was kind of forced to use him. However, if you’ve been watching Sampdoria in recent weeks, you’ll notice that Cassano has been playing in a somewhat new position. He is now more of a striker. He is no longer hanging out on the left flank waiting for the ball. Delneri said in a recent interview that Cassano has excellent scoring abilities but most of the time he is too far away from goal to use them, so he wanted to push Cassano forward and allow him to play closer to goal where he could finish off chances rather than create them. Delneri’s decision has been working. Cassano has scored in 4 of Samp’s last 5 games, and all but one of them (the midfield volley vs. Juve) have been inside the area and very opportunistic, Pippo Inzaghi-like goals.

If you watched the Samp-Genoa derby this past weekend, you could have noticed the changes to Cassano’s positioning. For the 55 minutes he was on the pitch (he had to be subbed due to injury), Cassano was more advanced than Pazzini on the pitch. Pazzini was more withdrawn and doing a lot of dirty work opening up spaces and such. Cassano was advanced and when Samp attacked you could notice that Cassano was much higher up the pitch than Pazzini. His goal is a prime example of the new position change. The old Cassano would’ve been outside the area on a set play like that. But the new Cassano was positioned at the far post perfectly, waiting for Guberti’s header and positioning himself excellently in the space next to Moretti where he beat him to the ball. A real goal poacher-like goal.

If Cassano can continue to have good enough off the ball movement and sheer work, adding a striker element to his trequartista/lazy winger game, he will have a good case for a much higher ranking, but for the time being with his history of unmatched unprofessionalim in mind, I remain skeptic.
When reading Del Neri's comments, Cassano doesn't really sound like a striker to his liking after all but more of a desperate measure and trouble can definitely still appear if the differences between the two men, as I suspect, are just too deeply rooted.

Ideally of course Cassano wouldn't be in stringent 4-4-2s at all but the paradox is that Cassano's weaknesses in many ways invite such tactics for his team.
But really he should just be on a better team with better players (right?) in well working fluid systems suiting his attacking strengths but that's another chance he has also blown again and again, for club and for country, on and off the field, the question is will he ever get another?

How he does in Del Neri's exact opposite to all of that, ironically could be the ultimate decider. 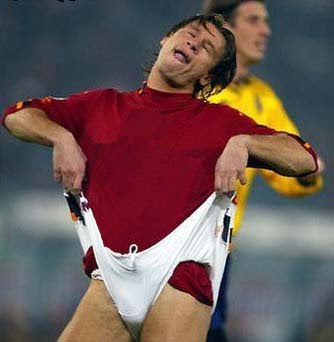 No such luck and so much for his so called new found maturity that the Italian press, despite frequent instances of the same old Cassano, kept printing stories about.

Yes in case you haven't heard, Cassano has had yet another fallout with one of his clubs (I believe that adds up every single one in his career so far!) and he hasn't played for Sampdoria in months. And according to their president he never will again.

I have no idea who is wrong or right, or what are the details exactly in his bitter row with the Sampdoria president, but these things just don't seem to happen for any other top footballers than Cassano.

The latest is a court case revolving around his contract. What will happen next I don't know but there has been a lot of talk about a January move. Where to will of course be very interesting.
Indsendt af Stefan kl. 02.28