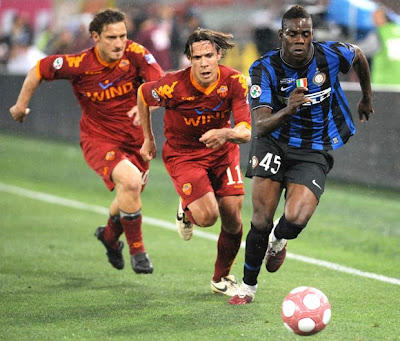 In record time one of the most controversial players in Italy who right from day one almost has found himself caught up in often very negative attention from the surroundings. Fans, coaches, fellow players and media, take you pick, feeling all provoked.

Balotelli probably has the best size/pace combination-potential out of anyone. That alone of course is massive and can lead to greatness.
He is big and technical enough to at some point develop into an excellent box presence and he is more than fast enough with and without the ball to take advantage (and find for himself even) space anywhere on the pitch.
So far due to Mourinho's mostly 4-3-3 tactics it's the latter taking place on the wing that's been more common and often impressive enough in itself, but I think it's once we'll see him more as a striker (whether second or centre-forward) instead of wide, that the real magic will start to happen.

The only thing still lacking there is bit too much of a winger mentality sometimes, even when central, where he doesn't always play up to his size so to speak and gets out muscled where he really shouldn't and either goes down or give up. Even if it will often result in a foul, which is rarely a bad thing no matter how unpopular, I think he could play stronger.

There is also no reason for him not to start improving in the air where he should have all it takes to become a dangerous weapon as well.

As a wide forward on the attacking front there are really few complaints. His work rate could be better, as well as his decision making, actually that's more general weaknesses, but his pace and technique overall makes him very good out there.

It's defensively that he just can't do what Mourinho wants from his wide forwards and more than anything it's that which has often kept him out of the 4-2-1-3 starting lineups, where especially against good teams Mourinho wants that fluidly to transform into a 4-5-1 when defending then right back when attacking, and Balotelli like many others before him, for Chelsea as well as Inter, tried and tested by Mourinho, overall was a hindrance to that working on a high enough level. At least the very high level needed to win a treble.

It's sometimes blurred by his erratics but another very positive sign I'm seeing from Balotelli adding to his athletic gifts, is some real final third creativity. I don't know if he picked it up from Ibrahimovic or what, but he does seem to have some real playmaking ability expressed through delicate touches and passes setting up teammates.

Also worth noting of course is his powerful shot.

So if one was to sum it all up, technically and athletically Balotelli is a very good player already and with upside since he'll only get stronger, but predictably enough for a 19 year old and perhaps especially for one under such scrutiny, and unique pressure you could say, the holes in his game are all mental related.
How, when and if that area will improve is another impossible discussion but hopefully it's more maturity related, than it is unwelcome surroundings unwilling to change that are holding him back. 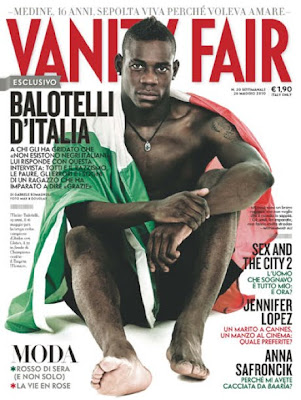 Not surprisingly Balotelli is off to a turbulent start at his new home in England.

There have been times he's shown a very high level and other times where it's been pretty dismal.

Injuries and suspensions already haven't helped either and for the time being it looks like Balotelli's biggest challenge will be to control his temper in the Premier League environment. Not least when it comes to not getting the freekicks he normally did, his short patience has really been put to the test. A test failed too often.

Then there is his partnership with key player Tevez who likes to move around a lot. Balotelli needs to take better advantage of the space that leaves, especially in attacking the box without the ball. Out wide he is fine but box play could be better.
Indsendt af Stefan kl. 05.14