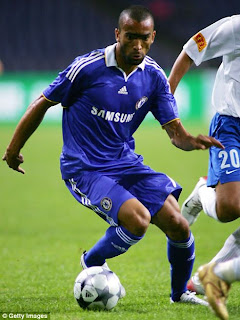 Unfortunately Bosingwa went down with a season ending knee injury early this season resulting in not only a somewhat lower ranking but also him missing the World Cup for Portugal.

Bosingwa is one of the best attacking fullbacks in the game and has pace and stamina to get up and down the wing the full 90 minutes.

He is a good crosser of the ball and while I wouldn't call him a great dribbler with exceptional control or anything like that he has enough acceleration to be a great threat anyway, and very few are better at making those overlapping attacking fullback runs.

As it so often goes with attacking fullbacks all that attacking prowess naturally overshadows his defensive game, but unlike quite a few other examples, giving Bosingwa any kind of reputation as a defensive liability would be very unjust. He is rarely caught out of position and is fast and strong enough to be a real handful for the attacking players.

Playing at right-back instead of Bosingwa at the World Cup will be Valencia right-back Miguel who was great four years ago, one of the tournament's best, but has had an up and down career since including losing his starting spot to Bosingwa.

Miguel at this point is quite a downgrade I think. He can still go forward well and is also a good athlete but not with Bosingwa's almost non stop effectiveness and he isn't very good defensively.

He is back from injury and with Chelsea's current depth trouble when it comes to centre-backs, last season's right-back revelation Ivanovic looks sure to be needed plenty central, resulting in quick playing time for Bosingwa in his comeback.

I thought he looked rusty in his first appearance but also thought I saw some good signs in the first half, going forward at least, against Everton. Not so good defensively though.
Indsendt af Stefan kl. 04.28