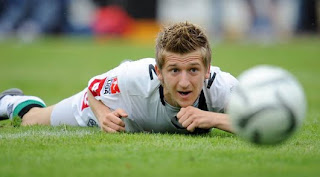 Hey it's the German Giovinco, kind of, except of course little Marko plays all the time for his club team and is on the national team as well :(

At only 168 cm (5'6) Marin is quick and extremely agile and his quick turns with the ball using his good control can be a nightmare for defenders. There is no doubt especially when coming from the wing that Marin is one of the best dribblers on the list and if in transition he maintains very good speed running with the ball.

One thing I'm not sure of yet regarding him is his general passing skills. Obviously he is not bad but for an example when it comes to crossing his dribbling and pace can bring him so far into enemy territory that more so than just electing to cross the ball it often ends up in combinations with teammates in and around the area.

His energy over 90 minutes is also very impressive and something that has perhaps improved this season where he sees less substitutions.

Again the weaknesses are pretty obvious. He is very small and though strength will likely still improve he can't be expected to be much of a presence defensively.

Werder Bremen are really struggling this season with serious balance issues resulting in their slow defenders (often inexplicable high up the pitch) getting exposed again and again.

In all of this mess Marko Marin kind of functions in his own little world of showing plenty of ability in the opponent final third.

Secretly he must wish though, that in these games full of Bremen holes, that he was on the opposing team instead! What perfect conditions he would have to perform his Marko Marin magic.
Indsendt af Stefan kl. 23.01