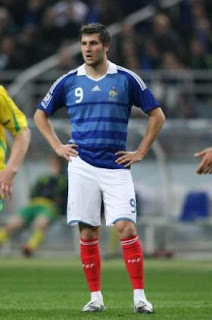 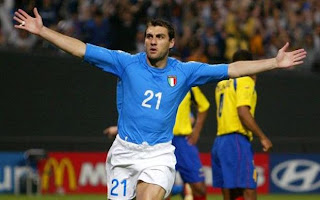 The second coming of Christian Vieri?

Well that's what it seemed like to me last season when Gignac netted 24 goals on a low scoring team and impressively became Ligue 1. top scorer.

Vieri himself didn't really break through until he was around 23-24 either, same age as Gignac last season.

Very similar in build Gignac also showed similar power and some of the same type of unstoppable runs that made Vieri, despite his build, such a dynamic player at his best. There is definitely pace, and Gignac even possesses a Vieri-like powerful shot! What's not to like then?

Well unfortunately this season it's wasn't just Toulouse who were low scoring, Gignac largely was unable to find the net at all.
8 goals was his sad final tally and despite (deservedly) remaining in the France picture, and going to the World Cup, it's difficult ranking a striker still playing for a midtable Ligue 1 club, with only 8 goals to his name this season (to his credit still their joint top scorer!) very highly among the best in the world right now, even if I really like everything I see. Which I do!
I mean the prime Christian Vieri is easily one of the best strikers I've ever seen and if Gignac, like I believe, has even some of that, he is in very good shape.

Well, that until he gets fat like Vieri also did.

Gignac just can't seem to find the net. Whenever I've watched him for his new team Marseille it's always inside of the post and out to such an extent that I'm ready to name him unluckiest striker around.

Maybe it's some kind of destined payback for everything going in two years ago on his way to the Ligue 1 topscorer title when he was still playing for Toulouse?

Anyway, to get serious, I love that Marseille coach Deschamps continues to show confidence in Gignac and keep starting him as their centre-forward.

After Niang is gone he is definitely their best option there and while Brandao has his usefulness, not least in making life very annoying for opposing defenders, Gignac is at least a level above.

Marseille has goalscoring other places too now with the young star wings (and capable forwards in their own right) Loic Remy and Andre Ayew proving dangerous.

With all that said, neither Marseille or Gignac's decent placing on this list can live with his current output.
Indsendt af Stefan kl. 04.30