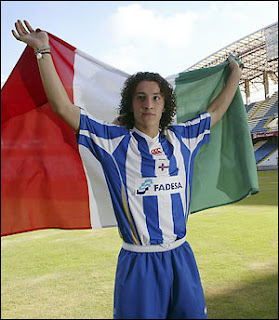 A player I haven't seen too much of this season so I hope his ranking isn't misplaced, whether that means too high or too low.

An extremely energetic and agile dribbler Guardado has enough skill with his left foot (control, shooting and range of passing) to have a good case for the highest ranked winger so far no matter what, but what really sets him apart from the many other skilled pacy wingers as of yet on this list is his great work rate. He works hard defensively as well and while he isn't strong enough to be a very good defensive player, he puts his great stamina to use and helps the team (somewhere Hugo Sanchez is scorning) in both parts of the game.

Unlike a lot of wingers Guardado is also good enough to be effective where space is more narrow in the central, even be creative there, and an interesting x-factor in his game, even if you don't see it too much when he is on the wing a lot, is some definitely above winger-average leaping ability making him a pretty good header of the ball. 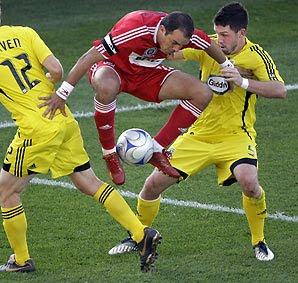 is still going like he was 10 years younger, Mexico will be very dependent on Guardado for attacking inspiration. Especially you could say with perhaps a fading less dependable leader at the back in Rafael Marquez, which was what orchestrated the almost-upset against Argentina four years ago. But this time perhaps the Mexican strengths lie elsewhere.

Well even with Blanco being perhaps the least athletic player at a World Cup for decades, the Mexican's strengths were definitely in attack and (also) even with Guardado sacrificed tactically they proved very capable. So much so I kind of favored them to beat tactically messed up Argentina.

Anyway, Guardado, when he did get to play, showed very good things I thought, not least pace, energy but great range of passing too. Now though he finds himself in a difficult situation at a La Coruna team that's just not very good and one that could find itself in serious danger of getting relegated.

At this point a move might be the best for his career.
Indsendt af Stefan kl. 04.32