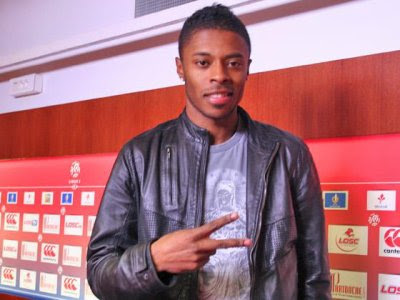 No this is not a Robinho clone since Bastos is a lot more versatile, offers more teamwork and also does not possess the same attacking talents with the notable exception of his great shooting and set piece expertise which always results in a good amount of goals.

In the 2008/2009 season playing for Lille he took the league by storm racking up assists and spectacular goals with his excellent left foot.
Had it not been for an even more outstanding season from Yoann Gourcuff in a beautiful titanic effort leading Bordeaux to the title, breaking the Lyon stronghold, he could easily have been player of the year.

This year for a Lyon team that much of the season struggled to find its feet wasn't as good. They came good in the end but in the meantime Bastos had been used all over the place, not unusually benched in Ligue 1 then starting in the Champions League, in different roles and positions and his form was at times uneven.

I'm not even sure where he is best. From the left-wing where he has had most of his success he can provide great deliveries into the box but it's not like he has the blazing speed and dribbling ability to take advantage of space as best as possible (or as the true elite) and torment an opposing fullback. He might actually have better odds at that moving into space in overlaps from a leftback role coming from further back, we saw that for Brazil, but there his defending isn't top notch.

He is probably at his best if not parked permanently out left but for an example in a 4-2-3-1 has someone in attacking central midfield he can switch around with, or on the opposite wing for that matter, and be versatile. Just so his game doesn't become too focused on beating a fullback one on one, but puts an element of being a good goal scoring threat into his game as well, in good shooting positions central or cutting inside from the right, where he of course can be very dangerous.
15 goals in all competitions in a season not unanimously seen as good, I think speak volumes of how effective he can be.

To conclude, Bastos is a very good versatile allround player with a great left foot but other than that not quite with the kind of flair and creativity you usually associate with the best players from Brazil.
What in my book puts him ahead of some of those, and other talented attacking players behind him on the list, is his team work, including ability to be part of a team defense but also good decision making and work rate without the ball in attack. When you add that to what his left-foot produces of goals and assists, you have a very effective player.

After once again missing out on the French championship Lyon strengthened the team further in hope of once again becoming the Ligue 1 team to beat. That has resulted in a very deep squad that sees rotation many places on the pitch. Not least midfield but even the central defense as well where usual defensive stalwart Cris has been joined by Papa Diakhete and Dejan Lovren.

Bastos with his qualities to his credit remains one of the safest starters (in his case wherever that may be) in the squad but it also remains a team you just can't help feeling should be playing even better. More consistently.

They have gotten over a bad start to the season to find at least some stability in the very unstable league at home. But in Europe, where they can usually be counted on, they've suffered some embarrassing defeats.
Indsendt af Stefan kl. 10.46