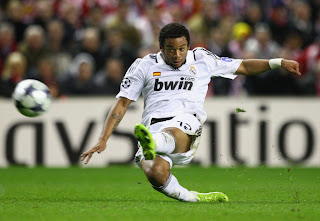 Despite what a disappointing Champions League exit to Lyon in a closely contested tie might lead you to believe, Real Madrid this season is an excellent team.

After all they're neck and neck with the just about undisputed best team in the world Barcelona at 77 points and a goal difference of 57 after 30 games.
One better than Barca and an 8 point and 19 goal improvement if you compare to the same stage last season, where it should be said that in the league at least they were actually considered to be rolling to such an extent that towards later stages of what was Barcelona's historic improvement of a season, there were actually some Barca nervousness (paranoia) if Madrid like they had done before could sneak up on them and steal another title.

What happened instead of course was Barcelona in early May, at the Bernebau no less, completely putting any doubt to rest and destroying Real Madrid 6-2 in what was yet another magnificent performance.

At the time of writing they're facing each other in just three days and it of course can't be ruled out that history will repeat itself, but this time it's only early April+closer in the standings and if you consider Barcelona currently through lots of injuries really are seeing their depth put to the test, then even if Barca sets things straight and win, this more than ever clash of giants, a much strengthened Real Madrid could still end up stealing the title later focusing their vast resources on the league entirely while Barca once again will be busy playing and preparing for massive Champions League games.

I won't say Barcelona absolutely must beat Madrid again to retain the title but getting even the smallest of margins, with both teams so dominant, would certainly be very useful.

Of the various expensive Real Madrid additions to their squad some have been as good as advertised, some worse and others about what you would expect.
Of the players already in place, some have struggled and are seeing less playing time but then there are those who seemingly have lifted their game and fitted in very well with their new excellent teammates.

The most spectacular example of that (and he was already very good) is of course Gonzalo Higuain who has exploded with 24 goals in 20 games, but also Marcelo though more under the radar is enjoying his career best season and has shown, perhaps for the first time in 4 seasons at Madrid, where people are extremely hard to please, good enough play to be viewed as an actual strength to the team rather than a weakness.

A big part of that has been getting moved away from a position where he spent a good part of the time doing what he did worst. At left-back defending often one on one which is his clear weakness.

This season he has been moved up to midfield playing left-central in Pelligrini's flexible system often referred to as a 4-2-2-2.

There it's much less one on one defending, especially when he often has two excellent defensive midfielders (Alonso and Diarra) behind or around him and he is just another part of the team defending and staying disciplined occupying his left midfield position.
Again something easier than time and time again after an offensive raid playing as fullback having to track even further back only there to be caught up in difficult one on one matchups against whatever La Liga winger on the given day.

Instead in the 27 league games Marcelo has started (more than any other Real Madrid player) it's been his excellent technical skills and the quickness/flashiness he can use them with that's been on the forefront and with them (he leads the team in assists), perhaps surprisingly, he has become an important part of a very strong team, after being a weak link on a much weaker one.

When several left-backs were rumored to Madrid during the transfer window it was thought Mourinho maybe wasn't all that confident in Marcelo's ability and wanted to upgrade.

Nothing happened though and so far Marcelo has been doing fine and arguably performed his best ever (back) at his original position.

Of course, this is for a team dominating the majority of their La Liga opposition meaning Marcelo has a much better environment to shine than he has had on the more fragile Real Madrid teams in previous years.

It will be interesting if he can win the spot on the Brazil national team.
Indsendt af Stefan kl. 23.37