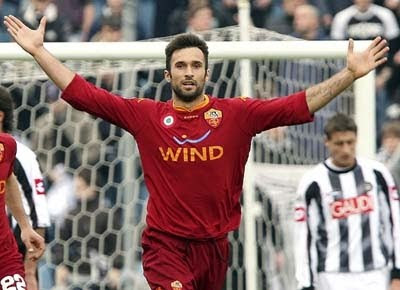 The versatile forward is effective both coming from the left in wider more technical/pace demanding roles or as a centre forward playing good parts of the game with his back to the goal requiring strength and control.

That he in what you could call true Balkan striker style is also capable of sparks of trickery in whatever the role is another thing that adds in his favor.

In short this is a classy forward who when it comes to just about everything isn't as good as the best out there but who gains many placings through completeness and versatility.

The 2010/11 season isn't going quite the way Vucinic would have wanted it.

Club icon Totti and new striker Borriello have been seeing most of the attacking minutes and Vucinic is growing more and more frustrated.

It makes sense that Borriello plays because, like Ranieri points out, he attacks the penalty area in a way that Totti hasn't done in years and like no other Roma forward have been doing since the days of Vincenzo Montella.

No, it's not entirely coincidental that it was after Montella's departure that then coach Luciano Spalletti went 4-6-0-strikerless.

But Vucinic real complaint focus point should be Francesco Totti who has been very poor so far this season with very few glimpses of anything positive, and there is no doubt that Vucinic is the better player right now.
It's just that benching a player with Totti's stature, more commonly than the occasional rotation, is a very complicated matter.
Indsendt af Stefan kl. 10.33