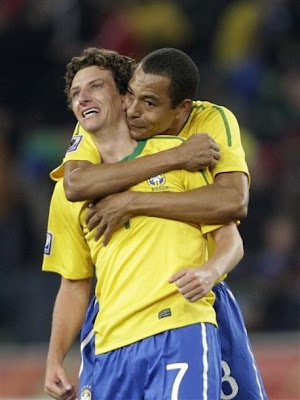 Not a lot of these rankings will effected by the World Cup. At least I try to avoid it and any effect should be short lived anyway, but after not seeing Elano for a while he really reminded me during the World Cup what a good player he can be.

There were plenty of skills. Effective pace, thunderous shooting, nice dribbling and rather than flash for the sake of flash, the well known Robinho weakness, some great chance-creating deliveries into the box and even enough hard work to win the place as the right-central midfielder,including holding his own defensively.

For whatever reason things didn't really work out for Elano at struggling Turkish giants Galatasaray and December 1st he was shipped back to Brazil to Santos where his work with star upstarts Neymar and Ganso has intriguing prospects.

Neymar especially, hopefully can take something with him from Elano's European experiences. It could be useful in only a matter of time.
Indsendt af Stefan kl. 03.16