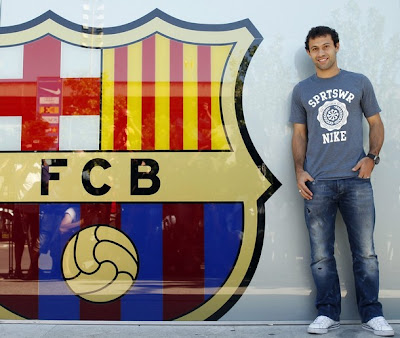 Defensive master like few others. Mascherano has great work rate and tackling ability and during his time at Liverpool was a key player in some of the best defensive performances in recent years.

With his excellent defensive qualities but limitations in contributing going forward in almost any way, he in many ways embodied a Liverpool team that especially in the Champions League against good technical sides gained the reputation of maybe the toughest matchup around.

In the Premier League it was often similar, and at least (to some extent) until Xabi Alonso especially in his final year took his play to another level, it was a side you'd often see struggling to get enough going in attack to put away the same smaller sides the other top teams took care of mostly with ease, while against the very top teams you could see Benitez Liverpool compete at a very high level.

It's really no secret what Mascherano does well. He is an enforcer or spoiler if you will who knows every trick in the book (who won't hesitate to use them either) and whether his defensive job, and it is always a defensive job for Mascherano, is tight tactical defending holding together the midfield chains (straight lines Benitez style, notice his obsessive hand gestures signaling this to his players constantly throughout every game) and defending his zone or if it's more aggressive pressure, battling to win the midfield, winning tackles in the process, Mascherano will do as great a job as anyone out there.

What's most impressive about his work is his range of defending I think. Not meant like he gets out of position, that would be as bad for him as it would a centre-back, but in the concentrated area that is central midfield he really does seem to be able to do more defensively in more places more often than perhaps anyone else out there.

On this list in many ways (like on the pitch actually) Mascherano where he ended up (fitting I think right before the top 50) became sort of the ultimate defensive block for the attacking players. Or for that matter the best players with something to offer both defensively and going forward. The one defensive specialist that only the most special players would be able to go past up the list. The one excellent defensive player, providing us with one final defensive stand where even small chinks in the (attacking player's) armor, or a few questionmarks here and there, like with Arshavin and his consistency, would be enough to stop the rise up the list and instead get to be - ranked behind
Mascherano.

Mascherano got out of Hodgson's Liverpool and joined Barcelona where perhaps not surprisingly he hasn't made that much of an impact, even if he hasn't done badly at all when given starts here and there.

Here are some thoughts of mine from the time of the transfer that I think cover both Mascherano and his direct competition Sergio Busquets pretty well:

Interestingly the physical area where I said Busquets was far behind someone like Mikel and had room to improve, he now looks very strong to me and can definitely win physical battles.

However Busquets is still a little too one dimensional for my taste, for me to call him one of the best in the world and I really wonder how he'd do taken out of his very specialized role of holding and passing well in small concentrated midfield area for teams, like Barca and Spain, that dominate possession in every single game.

Mascherano of course is another specialist but the defensive midfield specialist I think. So much so that like others have said, that maybe Busquet's one clear edge in passing, makes Masch almost redundant at Barca.

I'm definitely not willing to write him off though and here is what I said during the transfer speculation:

"That will be interesting. Barcelona does of course have plenty of games so there should be games for both. The positive is that they now have two defensive specialists instead of Toure, and Keita for that matter, who are more allround players better in less specialized roles.

When it does come to pure defensive specialization I do think Masch definitely is the best player and in a needed stern defensive effort or in physical midfield battle, would take him any day.

His problem will be though, that at Barca those don't really take place or are called upon every day like they were for Liverpool, if ever at all, so Busquets with his edge in maybe just a few things, like when it comes to forward passing, could still be the superior fit in the Barca style.

I have however always quite liked Masch's passing game from his position, you would see it previously on the pre-Maradona well organized attacking Argentina teams, and it will be interesting to see how it holds up so to speak on what is the ultimate passing team, Barcelona.

Even Xavi's description here of Busquets is kind of like Mascherano:

he’s a right bastard. He gets a leg in, he goes for the crash, he’s puta, from the street. That kind of cunning, you either have it or you don’t.

So they're actually kind of similar there, but with Busquet's having an edge in Barca passing and generally in the technical ability department that's needed there. He is strong as well and has become a good enforcer in the unique Barca environment of possession domination, but he is also slow (quite stiff no?) and limited outside his comfort zone of defensive midfield.

So is Mascherano of course (which has dumped him quite a bit on my list) but he is quicker. Has a good passing game of his own with an amazing work rate and a range of quality defending that is quite unique I think.

I'm still unsure if Busquets could be a great defensive midfielder or perhaps rather a very good midfielder on many other good teams. How would he perform his defensive duties on normal teams that don't dominate possession. Put on pressure without the ball, defend his zone with either pressure or by having to back of for large periods of a game? How good would he be in a normal team defense. Likely not bad at all, but I'm not totally confident he is already as good as the best.

The other area where he could really (once again to his credit) surprise me and jump in my estimation would be if I saw just a little more quality from him further forward. Like both Keita and Toure have shown. I know that's not his role but just some evidence here and there would be enough.

So to conclude I do lean towards that for Barcelona at least Busquets is better than Mascherano.