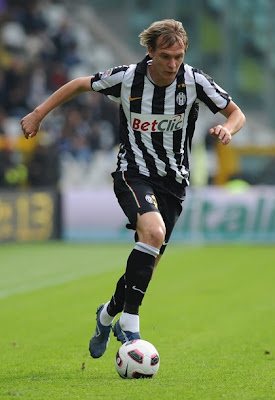 Krasic has fantastic acceleration on the first meters making him extremely dangerous one on one for defenders.

In full flow he can get into shooting or delivery positions almost at will. Where he is also capable.

When I saw him for CSKA or Serbia I remember also being impressed with his work-rate.

Not anywhere near, Pavel Neded, who he is unfortunately being compared with, but pretty good nonetheless.

For his new club Juventus we haven't really seen that and defensively he has been poor as well and so far unable to defend his wing.

It's been all about the attack and on a team with not that much else to offer there on the highest level anymore, there is a real danger for Krasic that Serie A opponents will really target him trying to take the overwhelming threat that he poses, compared to the rest of the Juventus players, out of the game.

Then being able to contribute with other things would really be useful. Not just for his team but also in taking him further up the list.

With a trademark unstoppable run Krasic scored a last second winner against Lazio.

Also worth noting is some recent improved tactical play when it comes to defending and it looks like he is getting more comfortable with coah Del Neri's demands.