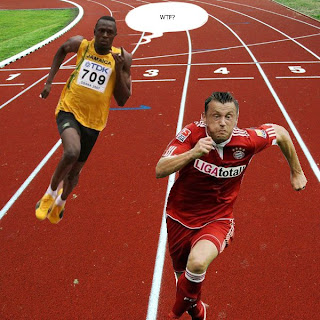 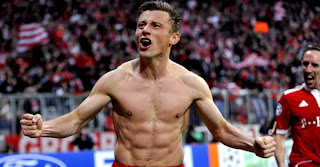 He runs, he runs and he runs. He runs really fast!

Olic has probably been one of the more underrated players for years now but at 30 not least thanks to some splendid Champions League performances he is finally getting some well deserved attention.

He is an incredible hard worker who is always on the move and is consistently a passing option when the team is in possession. There he is comfortable getting the ball both on the wing and of course when as a striker he makes runs down the middle. Overall Olic is just a true everywhere-man in the final third.
Then when his team isn't in possession he will consistently be the first man to defend and his pressing at this point has become legendary.

If you put those things together he must be one of the most annoying forwards you can face as a defender. A true pest to play against where there is never a moment of rest. He is either constantly on the move looking for space doing everything he can to escape marking, and then immediately when his team doesn't have the ball, it's the exact opposite and he is right in your face looking to win it back.

All of those mental and physical attributes would in my book have earned him a good ranking standing alone but Olic even has considerable skill. Best is his ball-control allowing him to make some really sharp turns when running high speed with the ball, but he is also a good finisher and how many goals he scores is only down to what role he plays on the team, which brings us to his versatility where he is strong (fast and skilled) enough to play both as a winger and as a forward in just about any system you can imagine.

Olic hardly got to play in 2010/11 before he was hit by a serious knee injury that will be sidelining him for months.

He was so great last season and hopefully we'll get to see that level sometime in the future once again.
Indsendt af Stefan kl. 05.28