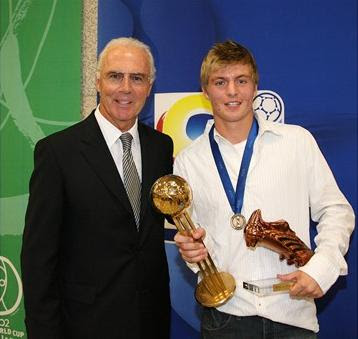 That photo of Kroos, the young Bundesliga sensation and the legendary Kaiser himself was taken back in 2007 at the U-17 World Cup where Kroos was awarded the Golden Ball as player of the tournament.

As a 16 year old he had already been signed by Bayern Munich and done so well for their youth team that at 17 he was promoted to their senior squad. There he showed great things as well - for starters he set up two goals in his 2008 debut - but appearances predictably were very limited and he was sent to Leverkusen on loan.

A loan-deal that was then extended into this season in what turned out to be a great move not just for Leverkusen where Kroos played a big part in taking them straight to the top of the table with one brilliant display after another, but for Kroos himself who got the stage where at a young age he could take the Bundesliga and the Germans so much by storm that he'll be very hard to avoid for the World Cup.

When I first saw Kroos he kind of reminded me of young Steven Gerrard. Build and appearance seemed similar and there was that striking ability when kicking a football to have it do whatever he wanted. Especially when it came to shooting. 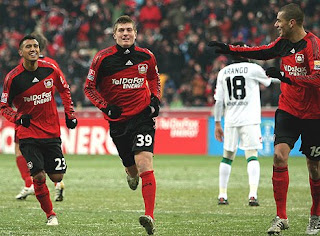 Now this was a sketchy first impression and Kroos doesn't have that freak athletic ability and unique drive of Gerrard when Gerrard is at his best, making Kroos a less dynamic player, but what he does have is a silky touch when it comes to ballcontrol and the more delicate passes, he even has vision, and then, again like Gerrard, when it comes to crosses, for an example on set pieces, he can really put force into the ball and be accurate at the same time. Or how about just electing to put the ball into the back of the net!

Kroos quite simply has excellent technique involving anything that has to do with kicking a football and that is not a bad thing at all.

Kroos as expected returned to Bayern München this season.

Compared to Leverkusen he's been playing more central and quite often struggled to make a real impact. At least one similar to what he did at Leverkusen.

The ineffectiveness of Klose, who Van Gaal kept sticking with, probably didn't help but as it is right now there aren't any indications that behind a striker in a 4-2-3-1 is Kroos best position. It might very well be in the future but right now there isn't enough difference-making coming from him there. Neither by being dynamic as a scoring threat himself or creative enough to provide for the attacking players around him.

Out wide with his great deliveries would make more sense or how about the latest speculation, that he has a future further back in central midfield. There he wouldn't be expected to be a great difference-maker, but could make a very solid contribution to the team with his classy technique and range of passing.

Even for Bayern he would have to improve defensively. But for starters physically, where he isn't a weakling and has a lot of upside I think, improvements are right around the corner.
Indsendt af Stefan kl. 02.53