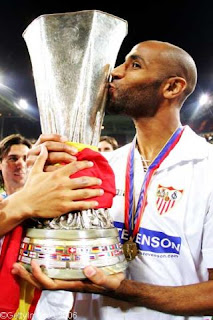 Always very impressive looking and highly gifted striker who with his athleticism, size and considerable skill has tormented La Liga defenses for years.

He is likely on the decline though and at 32 years of age has started just 15 league games this season struggling to find his top fitness thereby hurting his ranking.

But when at his best he remains a graceful player who not only has size but enough pace and ball control to go along with it enabling him to be effective anywhere in the final third. From making runs from outside the box to inside it being a strong skillful presence.

Kanoute finally found his consistency in Spain and over this period, really has been a striker close to having it all, and the fact that he hasn't been able to contribute nearly as much this season, for the first time in years, has to be one of the main reasons for Sevilla's very unexpected bad season.

With various Sevilla attacking players still to come on the list you'd think they had enough depth to withstand that decline but the Kanoute partnership with Luis Fabiano (and Fabiano has started even less La Liga games this season) and what they brought together specifically seems like it has been a very big part of what Sevilla did so well in recent years and even with many other good players, including another excellent striker in Negredo, it suggests that they just haven't been able to find their way when without that duo up front.

In fact they've rarely started together this year (if at all actually) and in none of Sevilla's 12 defeats this season (counting both La Liga and Champions League) the starters have been Fabiano and Kanoute.

With a 2010/11 season underway that has already seen them change coach (in comes the experienced Manzano) Sevilla are still having a hard time rediscovering their winning formula.

If the original writeup is to be trusted, you just start playing the Fabiano/Kanoute duo regularly again but Fabiano keeps being unsettled every time you think he stays for good and Kanoute, despite often performing admirably, is still aging. Then in the wings they have the very good looking Negredo who's inconsistency would perhaps finally go away, would he just be a certain starter?

They have three very good strikers. Sometimes one play. Sometimes two. Not helping any of the combinations at the moment is the absence of their all important spark on the right wing Jesus Navas, who because of injuries have only played twice in La Liga this season.
Indsendt af Stefan kl. 02.19