I just couldn't let go of including this wonderful player on the list and the only reason he is not ranked higher is some last minute restraint.

The Russian Premier League players are hard to rank since it's not a league I watch other than in glimpses. Glimpses only occurring when national icon Michael Laudrup takes the Spartak hotseat and whaddayaknow suddenly football from Russia was on danish television! That didn't last very long though and here I am back in the dark.

There is no doubt though that it's a league that's become stronger and stronger for quite a while now. That obviously wouldn't happen without many good players so not having any on the list would seem like a mistake.

I included Rubin Kazan captain Sergei Semak as sort of a cadeau to that team's success and at the time of writing the great job they did against the best team in the world, Barcelona.

To be fair though Russia has a number of central midfielders at a similar level who would have a decent case for one of the lower places and then there is Ruben Kazan's best player and unanimous 2009 player of the year in Russia, Alejandro Dominguez, who has since perhaps unwisely switched to forward rich Valencia, he is someone who is still to come on the list.

2008 player of the year Zhirkov (Zyryanov incidentally was 2007) I included when he was yet to make his Chelsea debut and in the new order have him at 176. Likewise tank center forward Pogrebnyak also having his first season outside of Russia, he too made the list.

Other high profile former successful Russian premier league strikers with good cases are Vagner Love and Roman Pavluchenko. The latter was coming of a terrible start for his new club Tottenham and under new manager Harry Redknapp was yet to be given much of a chance. That has since changed and if I was to include him right now I think he could go as high as 160-159-158, or something like that.

If it was 2008 Vagner Love would be hard to overlook but if as he apparently did, started to slump or play bad in what is still a non top league, I don't think you should be included on this list.
Instead with seemingly almost every decent Brazilian player going the opposite direction he made his way back to his home country where of course I have even less of an idea how he is doing. Therefore all in all no Vagner Love on this list!

But of course these are all former Russian Premier League stars which I guess is pretty telling. It's when they leave we get a chance to watch them after all. Just think about how many years the highest ranked Russian player on this list, Arshavin played without getting noticed outside of Russia and Zyryanov (who I will get back to!) even worse sadly "already" 32 years of age and soon, if not already, declining, him I only got to see when Zenit started outplaying teams in Europe in 2007 and the national team under Hiddink finally stopped under achieving that same period.
Take this quote from Arsene Wenger about Arshavin (who he would later sign of course) during EURO 2008:

"Russia is the only country where a guy like him comes to the attention of the world at the age of 27. Suddenly, you discover him. It's not possible. You know every 21-year-old in France, Germany, Italy etc, but in this case we knew his name – but we had to see him play in a tournament like this." 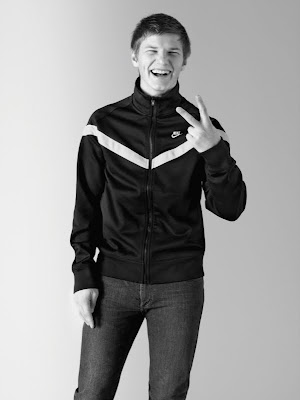 But what about the current best players (other than Zyryanov!)?

Well other than Rubin Kazan who I've already covered and where Semak was also named defensive midfielder of the year, the obvious place to look would be CSKA Moscov who are enjoying a great Champions League run but then as these things often go had a subpar league run, finishing 5th.
The main creative force on that team seems to be Milos Krasic and it's possible he could end up as one of the big omissions on this list but from limited viewing he is still not a player I have a great idea of and how good really is. Other possible stars of the future would be Keisuke Honda and former Russian young player of the year, still only 19, Alan Dzagoev.

Back in their defense however I'm a little upset I missed out on what could have been the most correct shared ranking of all had I just included identical twin beasts Aleksei and Vasili Berezutski.

Also in defense quickly establishing himself as one of the better left-backs in the league 18 year old Georgi Schennikov looks really good especially going forward in a Zhirkov kind of way but has big holes in his defensive game.

Perhaps it should also be noted that Krasic wasn't even the best right winger in the RPL last season.
That honor goes to pacy Vladimir Bystrov who played a big part in Spartak Moscow's resurrection from recent nightmares and tellingly he was also the most fouled player in the whole league.
In the middle of Spartak's run though he would make an in season 15 million euro switch to Zenit (yes lots of money in Russian football), the club where he started his career. There his great form continued, maybe even improved, but I've seen some reports that it was that switch which cost him the player of the year award that instead went to Dominguez.

Zenit this season (just starting in Russia) managed by former Roma 4-6-0 revolutionary Luciano Spalletti, will have both Bystrov and Zyryanov (as well as Denisov who is another very good looking player AS WELL AS former Torino best well kept secret -actual good playmaker- Alessandro Rosina) and if I was in any way religious I'd be saving a little prayer that they'll get through Champions League qualification so we get to see whatever comes out of this very intriguing mix. As well as getting to see wonderful play from Zyryanov for perhaps the final time.

Thankfully indications are that he is still going strong. He was named left midfielder of the year for starteres! A place where I haven't seen him play all that much but he is a very versatile player and with Bystrov checking in on the right that's where we'll see him from now on I guess.

Zyryanov with his great stamina and work rate he has been able to take care of central midfield work throughout his career and with his vision, intelligence and ball control he'll also create from attacking midfield whether it's on the wing or central.

Zyryanov (Zyrianov or Zuruanov, I'm seeing all three out there) is a unique mix of complete central midfielder, wing and playmaker all rolled into one excellent player.

Unfortunately I didn't get to see Zenit and Zyryanov in the Champions League. They were rather unlucky over two closely contested games in qualifying against Auxerre.

They did however regain the Russian championship in dominating fashion. Zyryanov by all accounts having another stellar season.

They'll be among the top favorites to take the Europa League.
Indsendt af Stefan kl. 23.20