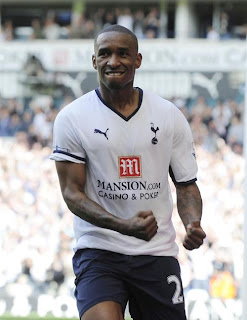 Old school sniper who is one of the most reliable goal scorers in the game.

Defoe has quickness and finishing skills in and around the box. His shooting especially has always been impressive.

While his technical skills such as ball-control and passing definitely are strengths rather than weaknesses he really isn't someone who offers that much more than goalscoring to his team meaning this is probably as far up the list he can go.
Actually that he is even up this relatively high is a testament of just how impressive I think that goalscoring ability of his is.

Defoe probably couldn't function all that well without a strike partner who he can work together with to create space central to take advantage of in the final third, so tactically he is rather limited (and not least limit his teams) and that way he is a dying breed of strikers and not really the type (die poachers die) that you'll see on most top teams these days.

Which is probably why he has never received the chance on one of the top teams and also why I wouldn't be surprised if Tottenham as they continue to develop into that will look for someone who will bring more to the team than Defoe does.

Then again Defoe is a Harry Redknapp favorite and I would also guess Redknapp in his managerial career has mostly played with two strikers typically in some kind of 4-4-2 variant.

Now ordinarily I would just have to think that there was a clear limit to how far that can go when the competition will be more flexible systems featuring strikers (Rooney,Drogba,Tevez, Van Persie and yeah Torres too) who do so much more than just score goals and who make people around them much better.

It should be said though that Tottenham has at least one and maybe even two players who much of this season has made up for that, lets say "stationary weakness" with extraordinary attacking play while at least holding their own defensively. First and foremost Luka Modric but to my great surprise Aaron Lennon as well before his injury. And if his play was a real improvement and the level he showed is here to stay, then perhaps mainly those two can lift a 4-4-2 with a couple of outright strikers in the lineup to heights that I didn't really think was possible in the current football environment.

Defoe is just back from injury and is in competition with Crouch and Pavluchenko over who should spearhead the very strong Tottenham midfield.

My first thought would be that Pavluchenko is the best equipped for that job. He is more complete than the others but what good does that do when the midfield is strong enough to kind of erase. or at least mask, the other two's weaknesses.

Meaning the lack of goalscoring from Crouch is made up for by Van der Vaart taking advantage of the Crouch characteristics perfectly, by quite simply scoring the goals himself!

And Defoe's lack of strength and teamwork made up for by him still being the best to take advantage of the quality pressure (and chances created) by a midfield good enough to do so against the large majority of teams, even without the help of an elite modern striker so to speak.

Yes, Pavluchenko is a modern striker, but of course not elite.
Indsendt af Stefan kl. 02.21