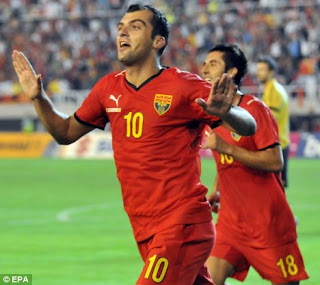 
Pandev missed most of the season forced to sit out when he was involved in a contract dispute with his club at the time Lazio and their boorish president Claudio Lotito.

Lotito getting so worked up over Pandev refusing to extend his contract that he ordered him isolated from the first team.

That went on for months and mainly resulted, in one: Lazio's attacking game without Pandev stagnating to such an extent that they spent much of the season battling relegation, and two: Pandev taking the matter to the courts eventually winning his freedom and being free to go (for free!) to whatever club interested in his services.

He went to Inter of course where he quickly became another piece in getting the passing game working that the Ibrahimovic-less Inter so desperately needs.

With his fine technical ability and final third movement he is someone very suited to complement Wesley Sneijder the new Inter centerpiece, as well as strikers Milito and Eto'o, both unlike Ibrahimvic dependent on good short passing surrounding them.

Position-wise Pandev can do a good job in all the attacking midfield positions as well as be more of a second striker. He also has a good work rate and will defend his position.

Unlike previously for Lazio and I assume unlike when he represents his country Macedonia, for Inter he is very much a tactical role player mainly present to the benefit of the even more skilled on the team, and as a result of that he might not shine as brightly there, but he has just enough skill, just enough pace, hard work and cleverness to make Mourinho prefer his contribution over for an example immensely talented Mario Balotelli. Even with Balotelli still being a total headcase often ruining his own cause, that is an achievement in itself.

Pandev continued his time at Inter as a very useful complementary piece (not least tactically) on the way to their amazing triumphs at the end of the 2009/10 season.

This season of course things have started a lot worse. Tactically the two-way-play wide role he played under Mourinho has seemingly gone extinct under new coach Benitez who prefers higher up the pitch wing play, including more pace with the ball than what Pandev has to offer.

The Mourinho role probably wasn't Pandev's strongest anyway. But his passing and movement without the ball coupled with defensive discipline worked very well with Sneijder, the other wide forward Eto'o and at the time in-form hitman Diego Milito up front.

Now we have Milito gone all the time through injuries. Eto'o as the new in-form striker, young players still unproven at this level Coutinho and Biabiny out wide, Sneijder understandably not quite in the same form and Pandev kind of filling in where ever there is trouble.

When Eto'o was recently banned Pandev even saw time as the top striker and not with great results.

With all the injuries, advanced age, Benitez new tactics in a can't win scenario if there ever was one, it's interesting and unpredictable times for a lot of the Inter players, including Pandev, who all could move one way or the other up the list. So keep an eye on that.

Next up for them is the club World Cup where Benitez in a do or die scenario is expected to bring back the trophy to owner Moratti.
Indsendt af Stefan kl. 00.00