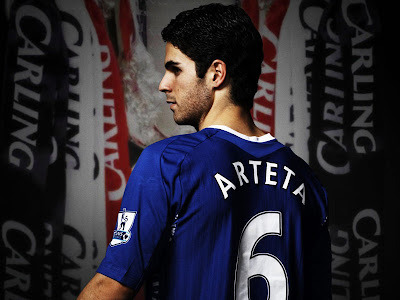 Due to a knee ligament injury suffered last season unfortunately Arteta was out for large parts of this one as well.

Therefore I did consider not including him, but once he made a strong return featuring several classy performances from January and onwards it was clear he had to be included.

Still, it is something that has hurt his ranking and I do worry about him a little bit, since rightly or wrongly, I'm not sure if coming back he was as dynamic as before the injury.
Of course even if I'm not wrong that could easily have to do with him playing primarily central midfield when he returned and not the more attacking and/or wider roles that we also used to see him in regularly over the years.

But not worrying at all was the level of his play where skill and intelligence reading the game were apparent immediately.
Arteta has excellent technique in all areas with a range of passing featuring some real playmaking ability whether it's shorter passes or crossing, he also has very good ball control and shooting ability.

This season though has been yet another slow start for them and with even the Everton midfield spending good parts of the season now missing pieces making up for missing pieces elsewhere is a lot more difficult. Not helping is better competition around them and rather than another giant upswing, continued up and down results look the more likely.

And Arteta in all of this?

Well I think he is as classy a midfield operator as ever but I also think I was right in my fear that he is just not a dynamic player anymore and for an example out wide would not be a place where he would feel at home anymore.

And this is Everton's problem I think. There is a clear as day lack of any dynamic threat.

The strikers Yakubu and Saha and their bodies are faltering. New signing Beckford hasn't proved ready. The only goalscorer, and not through pace, has been Tim Cahill.

Out wide Seamus Coleman will look promising but for the time being remain largely ineffective and on the other side Bilyaletdinov, who started promising enough last season, has apparently lost the trust of David Moyes. Steven Piennar is much better but like Arteta he could really use a quality striker to work with.

As it is right now, in large parts through not having a striker the quality work from both Arteta and Pienaar are going to waste and Everton's attacking threat is reduced to runs into the box from Cahill meeting the always reliable deliveries from left-back Leighton Baines. That's a very nice bonus-weapon to have, but simply not enough for a top half team in the strongest league in the world.
Indsendt af Stefan kl. 05.22