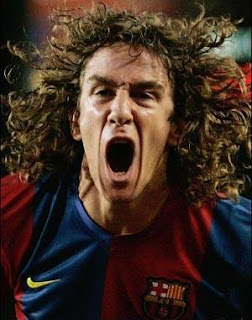 Inspirational warrior captain leader of the best club and country in the world, Puyol always defends with great intensity and possesses a knack for last ditch tackles preventing goals for the opposition.

In reality he probably gets a little too much credit for all things like the above and he probably hasn't been as good this season as previously.

In fact he probably isn't even the best central defender so far. But of course this isn't position by position rankings and like some other players previously on the list, Puyol also receives credit for being a very good right-back and with that mastering two positions.

As talked about in the Pique update already, Puyol has kind of been growing on me. I just don't see the mistakes that Pique is sometimes guilty of and in the one on one duels he is stronger I think.
Indsendt af Stefan kl. 02.23