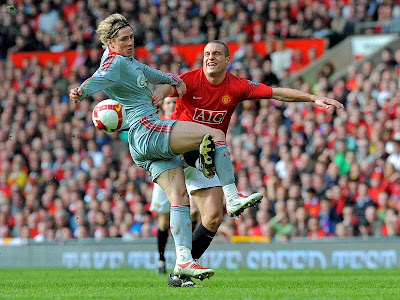 While a very good tackler capable of destruction, Vidic also specializes in always getting a foot... or his head 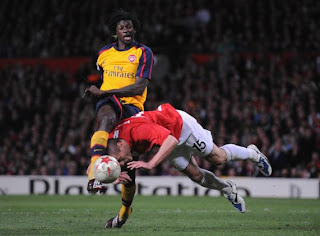 in front of whoever he is marking.

To prevent chances he is someone who really will do anything it takes.

In the air he is virtually unbeatable and while very much similar to most central defenders athletically he isn't the quickest, something like his agility shouldn't be underrated.

Much of why the last pack of centrebacks were ranked where they were, and not higher, was discussed here (Ferdinand, Carvalho, Terry) and while I do feel especially Ferdinand, but Carvalho as well, are more gifted than Vidic in some areas - Ferdinand's positioning and reading the game - Carvalho able to defend and make a difference with more range to it than Vidic - and both of them superior technically - health especially in Ferdinand's case, some decline in Carvalho's, sees Vidic despite some health issues on his own, but still very much in his prime playing consistently great, jump ahead of them.

Currently enjoying playing alongside a healthy Rio Ferdinand in the Manchester United central defense and while doing it making a strong case for best defender in the world.

Together they simply put on a clinic when it comes to defending in the box and not least with their timely powerful interventions and clearances they make certain so many hopeful opposition passes and crosses result in nothing dangerous at all.
Indsendt af Stefan kl. 05.32