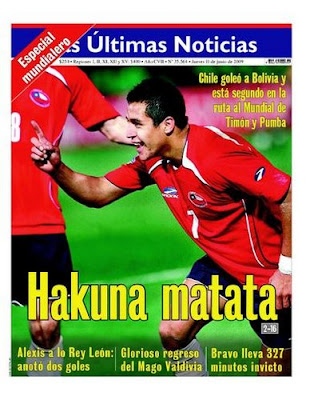 Sanchez despite great displays here and there hasn't really made his mark just yet in Serie A. Partly due to injuries and partly having to adjust. In South America though, even at only 21, he has already been a sensation and star for quite few years, and could if things go well for Chile become one of the stars at the World Cup.

It's for Chile you really see the best of him and occupying the right wing where he fits right into coach Bielsa's tactics.
With his explosiveness (few are faster on the first meters) and skill (in Sanchez case cannonball of a player is a very fitting description) he is a constant threat going forward in their fast paced passing game and through his strength and great energy he is a very needed weapon defensively in a pressing game so high up the pitch, featuring tons of individual defending, that it can sometimes look like full court pressure in basketball!

It's possible that's something that will get punished at the World Cup but it's definitely fun to watch and so different from what you usually see in Europe. Perhaps especially from national teams not as fine tuned (very needed to even attempt this I think) as club teams.

Sanchez playing for Chile is one of the things I'm most looking forward to at the World Cup and hopefully in Serie A as well next season Udinese will have a better platform for Sanchez to really take the league by storm like he's so been threatening to do for a while.

Sanchez did have a very good World Cup and both him Bielsa's unique Chile team were great to watch.

He is still at Udinese though, where for a while, and it could still turn out to be the end result, extremely tried and tested new coach Francesco Guidolin looked like he could be the worst possible news happening for Sanchez.

Guidolin while highly repected has had something like 10 different coaching gigs the last ten years and I think his latest stint at Parma was the only time where it didn't end with a dismissal.

Zamparini, Palermo's temperamental president alone has hired and fired Guidolin on four different occasions, so when I recently came across a description of Guidolin the coach, in former player Martin Jorgensen's self-biography, as something of a nervous wreck constantly in fear of losing his job, it made a lot of sense.

Guidolin it seems, likes to, or just can't help himself, constantly change things up in a never ending (and impossible) quest for the most safety, while Sanchez the player in stark contrast continues to be a hell raising gambler in a lot of his actions.

So not surprisingly after Udinese enjoyed a nightmare start to the season, bench time for Sanchez became the order of the match-day.
Then when the bad results continued anyhow, Guidolin forever restless brought Sanchez back into the lineup, only now in a whole new position away from the wing in a more free Trequartista, role including a lot more time and work central of the pitch than before.

I will not claim it was that very move which changed Udinese's fortunes. They have too good a squad to be flirting with relegation no matter what, but Sanchez one of their best players is playing well and that's something at least.

If it's his best position I'm not sure. He still isn't effective enough when it comes to the final ball or finish around goal, something even more important now, but it has at least brought him closer position-wise to ever green Udinese talisman Antonio Di Natale, and for a club still starving for a well-above Serie A-average centre-forward, having their two best attacking players working more together than before is a very useful thing indeed.
Indsendt af Stefan kl. 22.46