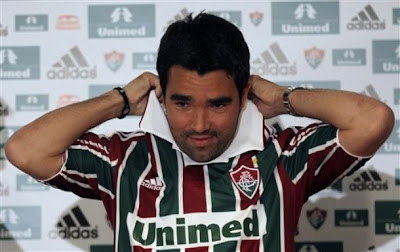 Definitely not an expected improvement in rank, but while it's not much to base it on, in this case we're dealing with a very well known player, who quite simply is what he is at this point in his career and I've been hearing a few good things about Deco's skill and performances in Brazil, so he keeps floating. Just.

It would be easy to push Deco off the list at this point and no one would even bat an eyelid, but for now he is just hanging on (is it the likely added weight?) and makes the list, likely for the last time, but who knows?

I think he had his return to Fluminense mostly ruined by injuries but from what I understand when playing since that bad start, he is definitely a standout when it comes to skill. However, I'm not a close follower of Brazilian league football so if someone has a different more well informed story, please don't hold it back.

But all in all him still being kind of good echoes well with my last Deco experiences in 2010 for Portugal where he was still very Deco- like conducting smoothly with nice ball control, passing and movement across the final third. I have a feeling the movement part of his game is down, but if he can actually be a stand out in a league that likely is getting stronger while getting richer (with many Brazil borderline and not so borderline stars either returning home or staying longer) then I do think he has a case to remain on the list.

I can't deny there is a good amount of guessing involved here. That Deco is still Deco able to conduct play with skills and movement.

That and Fluminese winning the Brazilian championship, where surely (please say it's so) he played his part, meaning that he defends his ranking.

Moving kinda off the radar back to Brazil in Fluminense.

He didn't have a great World Cup for a very defensive Portugal under Carlos Queiroz and his international career is now over.

Portugal seems to have somewhat found their new Deco though. One that's been threatening for a while but who by all accounts now is playing the best football in his career. Look for Moutinho much higher up on the list.

The above picture just to prove, there actually were good times for Deco at Chelsea!

Of course that player of the month award was in the opening month of last season where then manager Felipe Scolari, in the long run ill advisedly, had made Deco something of a centerpiece in a very unMourinho like blue brazil version of Chelsea.

That didn't end all too well but looking back now it's a nice illustration of the kind of style where Brazilian born and bred Deco almost couldn't help himself but thrive, and how basically ever since that was aborted, he hasn't been able to help himself from under-performing.

It was therefore tempting to drop Deco even further but for the time being, he is a dangerous 32 years of age where things can go downhill fast, he isn't really much worse I don't think than when he was considered one of the best attacking midfielders in Europe.

He has that great attacking midfield off the ball movement where he is consistently able to make himself a passing option and of course when he gets the ball his ability with it is well known making him for the better part of his career something of an ideal passing partner where space is tight central in the final third - but further back too Deco's good work rate ensures that he can contribute there as well.

One problem is that at Chelsea exploring that passing option isn't really all that optimal for the players around him a lot of the time or sometimes not even possible for what, if you compare to other teams where Deco has featured, is rather average ability to participate in an effective short passing game.

Not that there is anything wrong with that, on the contrary, Chelsea and most of their players are still at their best when it's a lot more Mourinho than it's Scolari. Something Hiddink understood and practiced to perfection but an area where current manager Ancelotti constantly struggles to maneuver in one direction or the other mostly ending somewhere in between the two. Not bad certainly but not quite great enough to have cemented the title win that the superior squad he has to work with suggests that he should have.

For Portugal Deco is still an important player and at 32 with an uncertain future the World Cup could be the last time we see Deco at his playmaking best.
Indsendt af Stefan kl. 02.31