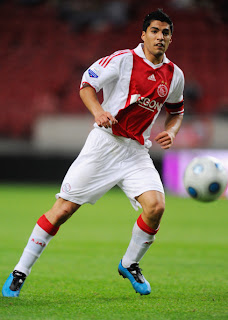 His virtual free role in the final third for Ajax has proved nothing short of a devilish nightmare for Eredivisie opponents this season who have just not been able to mark him AT ALL.

How well that goalscoring would translate into a better league with better defending I'm not sure. I'm actually a little skeptical how much of a goalscorer he'd really be, but his technique and great movement, especially with more or less a free role to roam around, would make him certainly a very good forward for a lot of teams.

A tricky player to rank since he still plays in Holland but without blowing his dominance there totally out of proportion and ranking him too high, I think rewarding Suarez for all that difference making in games with a ranking around here is okay...

With apologies to Ajax fans, but hopefully the club will get paid plenty for their sorrows, I'd really like to see Suarez in a better league next season and get a better picture of just how good he really is.

Suarez will also be at the World Cup of course where him and Atletico Madrid star Diego Forlan are one of the most interesting attacking duos around. They actually seem to do a lot of the same stuff and Suarez should at least watch his back for the more box orientated Palermo striker Edinson Cavani.
Of course both Forlan and Suarez score plenty of goals in the box but Cavani does have aerial ability and more of a physical presence. Something that could be needed.

No matter what, it's good news for Uruguay though, the more options the better, and once Forlan starts declining Suarez and Cavani both born in 1987 ensure that the future is safe, and on that note also watch out for another Palermo Uruguayan striker, 19 year old Abel Hernandez.

Not least when it comes to athleticism Suarez is better than I originally thought.

He is stronger, more agile and even quicker. If you add that to his other qualities then you have an elite attacking weapon.

One that I, with apologies to Ajax fans, would really like to see in one of the top leagues.
Indsendt af Stefan kl. 05.10