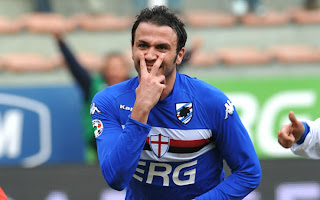 This was one of the quotes from Pazzini's coach at Sampdoria Luigi Del Neri in my Antonio Cassano writeup:

“Before Cassano couldn't manage many 30m sprints. When he plays further forward he has to sprint 10m so it's different. The question is: when will he do 30 separate 10m sprints?

With Pazzini on the other hand that's a question that doesn't even have to be asked.

Pazzini does those sprints in between opposing defenders tirelessly throughout every game. He has both the work-rate, the acceleration and off the ball movement to be very effective at it.

On top of that he has good ball-control and even some decent dribbling ability that he can use to make way for his very good shooting. In many ways then, a classic Italian dangerman! 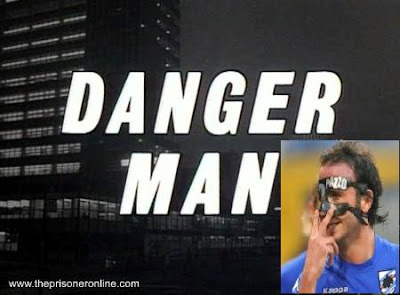 At Fiorentina Pazzini was behind in the pecking order to Gilardino and Mutu. With Mutu's career pretty much destroyed this season, Fiorentina could have really used him, but Pazzini moved to Sampdoria instead where, with apologies to Cassano and Palombo, he has been the best player ever since and a big part of their great results lately.

If I had to point out a non strong point it would be that even though he is certainly an option in the middle (if anything) he perhaps isn't the greatest fit in the more and more popular Italian 3 forward lines, at least if you compare to some of his Azzurri World Cup rivals, but he is so good in other areas that he should make the final squad anyway.

Not only is Pazzini now without the creativity of Cassano who after a row with the Sampdoria president looks unlikely to ever play for the club again, but new Sampdoria coach Domenico Di Carlo has been extremely defensive minded so far, heavily favoring defensive balance over the attacking play.

That approach might not even be a bad idea if you're realistic enough to rule out a repeat of the 2009/10 performance but Pazzini finds himself in difficult working conditions and will have to remain dangerously sharp to keep up his goalscoring.
Indsendt af Stefan kl. 02.51