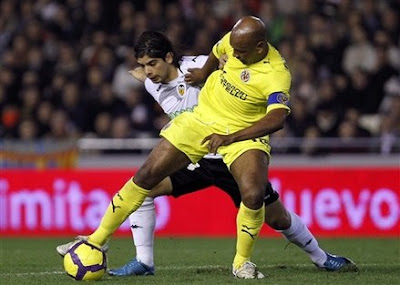 Spanish player of the year two years (but seems forever) ago now.

The 2009/10 season was a struggle for Brazilian born Senna with always unpleasantly tied lack of form but plenty of injuries being an almost permanent feature. However towards the end he did seemingly, just in time, find enough form to validate a World Cup spot on the all conquering Spain team where he had been a mainstay and key contributor, basically ever since being granted Spanish citizenship in 2006.

Most famously of course during EURO 2008 where performances of his featuring hardly putting a foot wrong earned him much praise.

This time it wasn't to be though. The emergence of Sergio Busquets, much improved, and ever improving throughout this season, and perhaps Busquets advantage of systematic familiarity with the Barca players everywhere around him, meant at this point a starting place for Senna had become increasingly unlikely.

Still it was a surprise that uncapped Basque Javi Martinez got a spot as the assigned defensive midfielder backup, but as Del Bosque said, he had a very good season. Senna (although Del Bosque didn't say so) had not. Martinez is also the future. Senna is not.

That is not to say it's all over for Senna as one of the finest at his position. It's possible he has seen some decline in athletic ability the last few years but when healthy he is still a very smooth midfield operator in all his actions both with an without the ball.

How much he has left is hard to say. I think it will be (and is already in many ways) similar to fellow Brazilian born (94 World Cup winners) excellent defensive midfielders with great careers in Spain, Mauro Silva and Mazinho who continued to be very good into their 30s.

An even better example perhaps is Donato, who like Senna became a Spaniard, and with Mauro Silva incidentally, seemed to last forever commanding the Deportivo La Coruna midfield.

Senna kinda reminds me of those.

So if he can overcome injury problems I expect similar from Senna at Villarreal. There are even rumors currently that he is in play to fill the midfield depth lost at Barcelona with Yaya Toure's departure. Who knows if that will happen. They may very well go for someone younger instead but perhaps it does show that he is at least still relevant at the highest level.

Not unlike several in-form teammates at Villarreal, Senna seems to have benefited from not playing during the summer (no World Cup virus on this team!), and he looks significantly better than he did during much of the injury plagued 2009/10 season.

Not quite the midfield master of previous years but Senna remains a quality player.
Indsendt af Stefan kl. 10.19