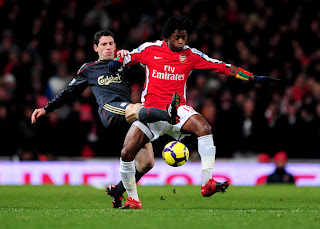 Song really started to come into his own last season and has uninterruptedly ever since been a model of consistency. He is also yet another player who has earned a ranking boost through great functionality in two different positions, defensive midfielder as well as sometimes a very capable central defender.

Where Song looks most impressive is one on one duels where he becomes an almost immovable object winning the ball the vast majority of the time. He has great strength and balance in those situations.

While he is not the quickest and doesn't offer much forward I have been impressed with his passing game. He has good distribution and doesn't subtract but definitely adds to Arsenal's possession game.

So does midfield partner Denilson you could say, who often has some of the best passing completion rates out of anyone, but unlike him Song has that clear physical defensive presence and doesn't make the downright gross mistakes without the ball that Denilson continues to do, at times costing Arsenal dearly.
Despite all that secure passing it isn't even given that Denilson is in fact positive value for Arsenal, while in Song's case there is no doubt whatsoever that he is indeed.

Another interesting comparison is much lower ranked Chelsea midfielder Mikel.
For my first few versions of this list Mikel was one the major stumbling blocks obstructing Song's entrance. I couldn't really see Song being much better, or worse for that matter, but it's now clear to me that Song's better passing game and ability to play two positions has him ahead of someone like Mikel by a good margin.

Song is one of the players on the list who has had one of the more unexpected 2010/11 seasons so far.

From primarily a defensive midfielder, often bordering on holding, he's now making plenty of runs forward and participate more actively than ever in the attacking play.

That's not something that has been unknown for his national team but I don't remember it for Arsenal.

For an example he's already had as many shots on goal this season, following 20 games for Arsenal, as he had for them all last season.

To his credit he has actually been showing things I wasn't confident he could do going forward and in some sense that could help his ranking. Even if I'm skeptical that it's providing real value for his team and not hurting more than it adds.

Then there is defensively where it helps paint a picture of a lesser player than what I based my original ranking on.

In other words, put harshly for the time being, I liked him in a restricted role, but his attempt at box to box isn't satisfactory neither on the attack or when he is defending.
Indsendt af Stefan kl. 02.55