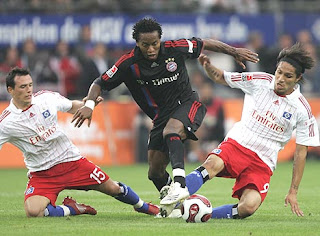 A long time ago when he first arrived in Europe, Ze Roberto was a left-back and if I remember correctly at the time Brazil's second choice at that position.

Of course it just happened to be so that the team who signed him Real Madrid in their typical way of doing things not so sensible when it comes to transfers, had already secured Brazil's undisputed number one at that position, none other than Roberto Carlos.
Carlos of course would go on to have a great career at Real Madrid before losing his speed and towards the end fading badly.
Ze Roberto on the other hand went on to only play a handful of games for Madrid cause there just wasn't room for him, but perhaps in part thanks to Roberto Carlos stronghold of the left-back position, sought new territory in midfield, central and wing, and is still going strong now 13 years later aged 35.

Unbelievably after Ze Roberto left Real Madrid they signed another one of the best left-backs at the time Croatian Robert Jarni who had been excellent for years but who naturally also found himself behind Carlos.

Anyway, to get back on track Ze Roberto has had a good long career in Germany with many seasons in both Leverkusen and Bayern München where he won four championships and over the years he has even amassed 84 Brazil caps.

If this was last season where he was a most of the time starter on an underachieving Bayern side I probably would not have included an old player like Ze Roberto on this list and would question if he had that much more to offer at the highest level, but for his new team Hamburg he is having a very good season. Especially in the beginning he was quite sensational even, before getting injured, but it's not like he is playing bad since coming back either.

For a 35 year old he isn't slow but he is definitely more at ease in central attacking roles these days, and have been for a while, where he can exploit and find space not with great winger like pace, but through great technical skills and creativity. Those are definitely his main assets and always will be but to really function in a central midfield role, even if attacking, in a top European league, the work rate has to be there, defensively as well, and Ze Roberto still brings that which is impressive.

There was some controversy when he missed a mid-season training camp, like Brazilians heading back to Europe after visiting home sometimes do, but the lazy Brazilian football player cliche isn't one you can put on Ze Roberto. He is in excellent condition and puts it effectively to use.

Ze Roberto now aged 36 continues to be going pretty strong and has even completed something of a full circle this season, and for Hamburger who are quite stacked when it comes to attacking midfielder types, found himself back where it all started so many years ago, playing at times, once again, as a fullback.