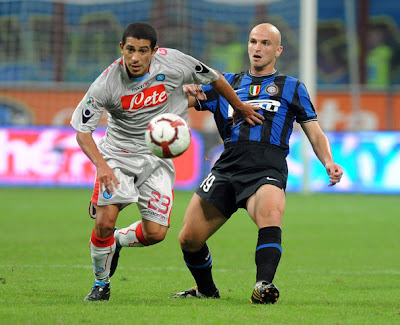 Small in stature but with a big heart Gargano could be one of the most underrated players in the world.

Despite his size this is a midfielder who can command. Defensively with his great work rate and ball winning ability where he is surprisingly strong and in possession where he doesn't just have good technique but a very impressive passing range.

The only weakness I can come up with (and it might be wrong) is that in a tactical demanding environment he perhaps hasn't adjusted a 100 percent yet. On pure talent he blows most of the defensive midfielders he face every week well away, he is just a much better player, but perhaps just perhaps if we're talking defensive positioning alone he isn't quite up there with your good/standard Serie A defensive midfielder.

With my limited knowledge of the Uruguay national team, on paper their World Cup squad has good talent defensively, I chose to rate Diego Lugano pretty high, and not least up front with players still to come on this list, but in midfield I only really see Gargano. It will be interesting what kind of quality they have around him and if not much, if Gargano can carry them on his back.

I have to say Gargano isn't looking quite as good currently.

He is no doubt very valuable on the Napoli midfield where he'll defend and even create tempo the other way, whether it's running or passing, but both his intelligence and ability once he is inside or near if you will the final third leaves a lot more to be desired than what perhaps was my original impression.

I still remember excellent performances from him and some of those will be needed very soon or he'll likely continue to drop down the list.
Indsendt af Stefan kl. 03.00