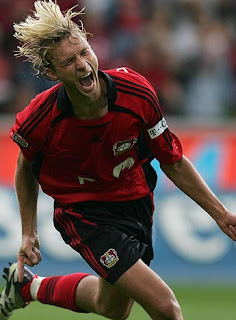 
The Leverkusen captain has really struggled with injuries lately and is having to come back from knee surgery twice between last season and now.
He started this season well enough and early on was another great influence in steering Leverkusen to the top of the Bundesliga table but then injury reappeared and late January he underwent a second knee operation.

That these troubles after years of game in game out service have surfaced during a World Cup year of course makes it extra bitter for Rolfes and I wonder if his place in the squad, let alone as the starting central midfielder he was establishing himself as, isn't now in serious danger.

Recent German national team central midfield mainstay Torsten Frings is long gone from contention, coach Joachim Löw has made that clear some time ago, but there is still plenty of competition from old names and new.
If we start with the oldest first, Michael Ballack, has slowly but surely seen the more defensive midfield roles mastered at Chelsea find their way onto the national team as well and even the younger but still national team veteran, Sebastian Schweinsteiger, for club team at least, is occupying more of a central midfielder role than before this season at Bayern München and doing well.

The most interesting of the younger names such as Sami Khedira and especially the more attacking midfielders such as Mesut Özil, Toni Kroos and the versatile Thomas Müller aren't direct competition for Rolfes, but they're still players it would (or should!) be tempting to make room for various places in the attacking midfield, by placing certain starters Ballack and Schweinsteiger further back. 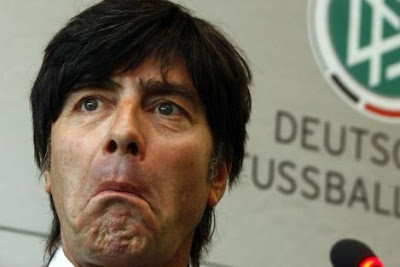 To describe what Rolfes bring to the team I like this quote that I found from Raphael Honigstein:

Sometimes you feel that German football specifically invented this type of player to lull the competition into a false sense of security before a tournament ("They've got who in midfield? Ha, ha, ha. Oh bugger, they're in the semis again").

It might not look impressive, the balance his teamwork brings to a team but it's valuable.

Most impressive is probably Rolfes stamina that has to be one of the best around and it makes sense that he is known as a workhorse also when it comes to training. If that stamina and the impressive work rate and ground covered that comes with it is the reason he can do his job without being a so called "midfield destroyer" I don't know, but much more important anyway than flying around in tackles is being in the right defensive position. Actually if you do too much of the first it could easily be a sign of the latter lacking. That's not the case with Simon Rolfes and that's a good thing.

He isn't just a runner though but has enough skills to be a good two way player and perhaps most noteworthy, his nice first touch passing game that's very valuable to the players mostly in front of him.

If it wasn't for his current injury problems he would be ranked higher and both Leverkusen and Germany will be better with a healthy Simon Rolfes.

Well, with not least the younger German players already mentioned in the original writeup, it turns out that making the current Germany team an even better one, might not be all that simple.

Especially in midfield where Schweinsteiger and Khedira proved themselves a formidable duo it's going to be tough for anyone, let alone a Simon Rolfes coming back from injury, to break in.

That's probably not among his real priorities right now either. At 27 he is quickly turning ancient compared to the new talent coming through (including all those making their way into Löw's extensive national team picture) almost non stop in the Bundesliga and I'm sure making great contributions once again at Leverkusen is instead what he puts his heart and soul into.

I think you can say he has been eased back into action. Even with the early injury to returning son Ballack, Leverkusen haven't at all needed Rolfes to carry the midfield load.

Arturo Vidal has been excellent and 21 year old Stefan Reinartz who earned a Germany call up playing in Rolfes absence last season, continues to do well.

As if that's not enough, Leverkusen also have one of the talented Bender twins, Lars (Sven is starting for runaway Bundesliga leaders Dortmund), on their hands, not to mention the more attacking midfielders/wingers/forwards like the young Sidney Sam and Renato Augusto also starting to really make names of themselves, and just like the German national team attacking stars mentioned in the original writeup, inclining veteran coach Jupp Heynckes to limit the number of central midfielders.

When it comes to Rolfes himself, he has been good whenever I've seen him. He brings great leadership and energy, but while it's a good thing that Leverkusen do rotate and take advantage of their midfield depth, for Rolfes not to drop in the rankings he will have to win the closest thing there is to a permanent starting spot back from Reinartz (who the jury that of course is me is still out on) after the winter break.
Indsendt af Stefan kl. 23.27