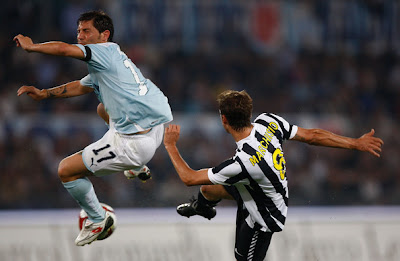 What he does is that he kicks people's behinds. Really hard and up in the air they go.

No, Marchisio at 23 I believe is "already" one of the better two-way players in the world with not that much more improvement to be made even, but this season, often criminally playing out of position as a left midfielder (often with real winger responsibilities, a classic case of the most complete player being the only remaining hope of filling holes in the squad) Marchisio just very rarely had a fair chance to show it, forcing me to show restraint and ranking him lower than I really think that his talents deserve.

Except for not being a winger Marchisio is a very complete player. He has very good technique like first touch and control. Even good finishing skills which, rinse and repeat, he didn't get much of a chance to show this season either.

He is 100 percent committed to teamwork and has a great engine that he really puts to use. His work-rate is nothing short of excellent.

He also has good pace and the only area where he might be lacking, the passing department where I just haven't seen anything special, he certainly isn't bad - I'm not sure his good technique and decisions make that an option even - but again he's been severely handicapped by playing out wide too much and generally for Juventus this season a complete lack of good passing options on what was a team with really poor movement.

The frustrating thing is that the left-central midfield spot wouldn't seem to suit his characteristics all that badly and we might see him in a similar role for Italy at the World Cup, but for Juventus with immobile centre forwards glued to the box like Amauri, Trezeguet (looking for crosses?) and even Del Piero not all that effective from out there anymore, plus basically a washed up Fabio Grosso also unable to provide any kind of quality width (or crosses for the statues cemented in the box), often it was Marchisio who ended up with that (winger) responsibility. A mission for him almost as impossible as when previously ranked central midfield powerhouses Sissoko and Melo at times also found themselves playing too wide...

Marchisio will probably never be a good winger but he certainly has the characteristics (including ability with both feet) to thrive in 3 man midfields. It might even be what suits him best but there needs to be mobility around him. At least one forward who has good movement (including out wide) in the final third, Anelka for Chelsea the last couple of seasons is a great example, and a good attacking fullback coming forward consistently is also a must.

It's difficult to predict exactly what system Italy coach Marcello Lippi will use at the World Cup. Like last time around I have a feeling we'll see several, but I'll be surprised if we won't see at least some Marchisio in a left-central midfield role, and with Grosso officially out of the squad, opening up the left-back door for Criscito, and with also a very mobile forward up front like Di Natale, it should work a lot better than what we saw for Juventus.

Due to mostly complete failure from Simone Pepe playing on the left and very good play from Aquilani (+non disasterous play from Melo) in the middle, Marchisio is actually back to filling what's mostly a left-midfield role for Juventus but thankfully he isn't trying, or being asked to, do a job as a classic winger or anything like that.

No he just does his thing with some solid play featuring exemplary teamwork both when attacking and defending and I can't help but think that If there just happened to be a top striker or a half decent left-back he could work with that it would all look a lot better.

That was a very positive original writeup though, so to throw some negative in, Marchisio definitely has his limitations both when it comes to off the ball pace and his rather modest passing game.
Indsendt af Stefan kl. 04.59