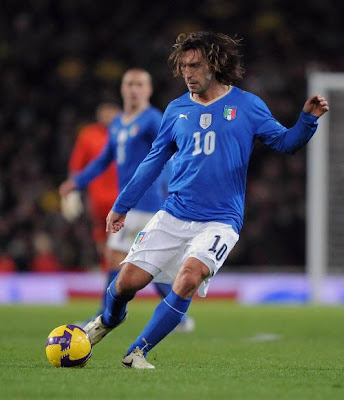 One of the best and most valuable players of his generation, being the most important contributor to both Champions League triumphs as well of course a World Cup win.

I first remember seeing him for Inter (don't have any memories of him from even earlier than that for Brescia) when in a game as a young attacking midfielder he came off the bench to replace Roberto Baggio.

With his supreme technique in all actions with the ball he immediately stood out and I was convinced right from his very first touches that this was the next great Italian number 10.

He didn't look particularly fast back then either, a little fragile too, but his first touches standing out in a game even more back then than it would now and then his godsend passing seemed levels above everyone else.

I didn't quite understand why Inter sent him out on loan back then but it was a time where they had several highly paid star forwards in their squad making playing time a challenge for everyone.
Indeed an aging Baggio was soon forced out as well only to end up having several impressive seasons, being the (divine pony tail) man again, at Pirlo's former club Brescia.

But to name some of the rich Inter attacking talent at the time. They had:

Ronaldo, Vieri, Zamorano, Djorkaeff, Baggio, very promising at the time Nicola Ventola and the year(s) Pirlo was loaned out the likes of young stars Recoba, Seedorf and Mutu had joined as well.

I'm not exactly sure how Pirlo did in those loan spells at Reggiana and then back to Brescia again for the 2000/2001 season meeting up once more with the legend Baggio but it did make me remember and search for this in retrospect fascinating goal against Juventus where as a clear sign of things to come Pirlo number 5 on his shirt regista style from deep central midfield with a trademark deep through ball finds Baggio who with his usual elegance turns it into a goal behind a perplexed Van der Sar in the Juve goal.

Elsewhere in the year 2000, Pirlo lead the azzurrini to the European Championship picking up the player of the tournament award in the process.

However the real breakthrough came when AC Milan decided it was a good idea to invest in the obvious young talent (imagine that!) and secured him for maybe, maybe not €18 million in one of those not uncommon Serie A deals at the time involving many players back and forth at strange prices, maybe or maybe not, to create some nice false profit in the books...

He started out in the attacking midfielder role but at some point came the important change into a deep-lying playmaker. A historic change that helped pave the way for the major successes mentioned in the opening lines of this writeup. European Cups. The World Cup.

It was a move I have always hailed Ancelotti for making but I recently learned that he doesn't even (to his credit I guess! Most coaches I'm guessing would love that on their cv) take credit for it himself.

This is from his autobiography:

"Pirlo really helped me out. He approached me one day and suggested that he could play in a deep position, just in front of the back four. I was extremely sceptical. He was an attacking midfielder, his tendency was to run with the ball. And yet, it worked. He became one of the best in the world in that role. I stuck Seedorf out wide, with Rui Costa and Rivaldo behind the lone striker and - presto! - there was my 4-3-2-1, or Christmas Tree."

All the more reason to hail the great player then which suits me just fine.

Pirlo would probably have become a very good trequartista too. Even with the complications involved of being such in this era of football. And while he isn't fast or strong enough to be a great goal scoring threat up there, it's not like he didn't consistently with technique and vision do great things in the final third too, it's just that the one area where he is truly unique, and still best in the world, the accurate passing, through balls even from sometimes way deep would largely be taken out of his game. There are others with tremendous range of passing and its always valuable, but Pirlo combines it with great vision and superb ball control.

It was incredibly valuable to have a player who even from deep in midfield would be a threat in attack. A threat to create a chance or a dangerous situation out of , or from rather, nowhere almost.

For Italy in 2006 it meant the team could attack with pinpoint effectiveness and be dangerous with only few players coming forward. Many teams nowadays playing defensive will attack with only few players to keep their defensive shape and men behind the ball when possession is lost again, but even in transition it will often be difficult to be dangerous cause you're sitting deep a long way from goal and maybe doesn't have enough individual quality to erase that deficit so to speak and manage to be a threat with only so few people attacking.

The team we saw do it best last season was Inter in the first leg of the Champions League semi-final against Barcelona where sitting deep they made minimal possession extremely effective by as often and quickly as possible seeking out their one skilled passer, Sneijder who would then make excellent quick one touch passes of many ranges to one of only 2-3 players making runs forward ahead of him. The rest of the team behind could then comfortably concentrate on keeping their defensive shape. They were already managing to be dangerous attacking with only 3-4 players.

Pirlo at important times for Italy and Milan was in the unique position rarely matched by anyone else that the very next second after having created something in attack he would be in position to defend. Simply cause he hadn't moved! That simple. That true. He was back in or near his own half ready to defend having created from deep.
It's very hard to do effectively even remotely consistently and needs a unique player to pull it off but when realized I almost can't emphasize enough the value I think it has, or imagine even a greater risk reward scenario for your team.

This is also why I've struggled finding the right ranking for him and I'm still not sure. One thing is comparing him to the players he is just ahead of, Ashley Cole, Vargas or Zanetti. They're so different it's almost impossible, but also when looking at Pirlo isolated it is very tricky. Because in theory despite whatever athletic decline he has seen, and it can look serious at times, somewhere on some team, he could still have that value. Those skills are still there.

Is he by now just a specialist then needing the perfect conditions but then if that's in place can be the most valuable player putting the team over the top, on to glory?

And should that mean an even lower ranking then or how about much higher, since in some ways you could say that's also at least one mark of an elite impact player...

The 2009/10 season for Pirlo despite difficult conditions, that I shall touch upon soon, was actually better I thought than the previous one. Mainly he stayed healthy (well until it really mattered at the World Cup SIGH) and I found myself impressed with his work rate and durability game in and game out.

The surroundings weren't kind to him though.

Around him there was less defensive protection than ever. One Veteran Ambrosini did his best but other than that I don't think there were many teams in Europe defending with less players than Milan consistently found themselves doing.
Opponents often had a free pass to the Milan penalty area and I'm still surprised the consequences suffered, in the form of more embarrassing defeats, weren't worse.

In attack they had very little movement in front of Pirlo. Attacking fullbacks who he has always had radar-like connections with when coming forward, think prime Zambrotta, Cafu or Grosso, were a clear weakness for the team and there wasn't much there for him to work with.

Of the front three the only one with good movement and not least pace was Pato and he struggled with health, so for good and bad, Pirlo in many ways, as the rest of the team, was reduced to hand the ball over to Ronaldinho, permanently parked on the left-wing, no need (or conditions you could say) for Pirlo to make special passes at all, and then just see what the Brazilian's genius could create.

Quite a lot actually if you had people up there near him. Something Pirlo was also forced to at times, and while that did mean goals and a team usually dangerous, it resulted in a very unbalanced team and generally very bad conditions for Pirlo who is so good in a team attack that has pace and movement. But for Milan found himself on a team where it was much more about individuals. Either up front trying to create on their own or in the back among the unfortunate few (not uncommonly including Pirlo somewhere) forced to defend on their own.

There simply was no team for Pirlo to put over the top.

Current Andrea Pirlo is still an excellent passer, Short and long with vision. His first touch is great and his skills at times means he can still go past people without pace. I also think he has good stamina and he continues to be an expert on set pieces.

He is very slow though and at times to such an extent it's possible to mistake him for a zombie out there slowly wandering around with an empty stare just lusting for some ball.
This also has made him easier to mark and he is still very much a target for the opposition. Then with so little movement around him he can be made to look pretty bad at times losing the ball in costly areas.

Defensively like already talked about his greatest value has always been that he is there back in position behind the ball ready to defend his zone and that actually is more important than tackling anyway but by no means is he a good defensive player (especially not now) and he needs protection in the form of defensive midfielders around him as his slowness duly prevents him from having any kind of range to his defending and if he is forced to press will look completely out of place.

All in all I'm still not sure where to rank him but for Milan and Pirlo's sake I hope their coach Allegri (one of Italy's most promising) will find a way around Ronaldinho (and indirectly Berlusconi perhaps) and create a more balanced side than what we saw from Leonardo.
Indsendt af Stefan kl. 10.56