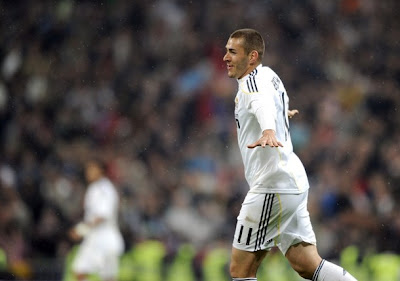 Benzema is one of the most naturally gifted strikers in the world. Strength combined with pace and considerable skills with upside.

So much so that I think he is someone who with a good next season under his belt could jump as much as 20 something places up the list. If not more.

However apart from very few exceptions (exceptions mostly having in common being universally recognized top 10-15 players in the world not long ago) almost everyone still to go on the list will be coming of either one outstanding season (in my eyes at least) or at least two very good ones playing at a very high level.

And for Benzema, despite all the tools being in place, last season did just abruptly put a stop sign to that.
Now I'm sure that's only in place temporarily and in just a matter of time with force he will run that sign over.

In many ways like with Gomez there is no shame either in losing playing time when the competition consists of other excellent players. One of them even, Higuain who with his finesse contra Benzema's physicality, had every condition in place for a great breakthrough season, both in terms of strength of teammates around him compared to the general opposition faced, and coach Manuel Pelligrini's tactics suiting finesse rather than power.

But who is to say that at some point that won't be reversed under new coach Mourinho?

They're definitely two completely different coaches and even if that reversal of fortunes doesn't materialize exactly, I will be very surprised if Benzema won't be much more of a factor this season under Mourinho than he was for Pelligrini.

Part Higuain playing great enough to never open the door. Part Mourinho insisting on the virtual same starting 11 over and over early, to create the needed chemistry right off the bat to try and keep up with a Barcelona team with all the chemistry in the world.

Higuain did suffer an injury recently which duly meant starts for Benzema, where he showed the kind of talent that he has.

He is kind of too good to play that much of a second fiddle, to anyone almost, but until Real Madrid have another very good striker as the Higuain alternative, it's difficult to see him leave.
Indsendt af Stefan kl. 11.06