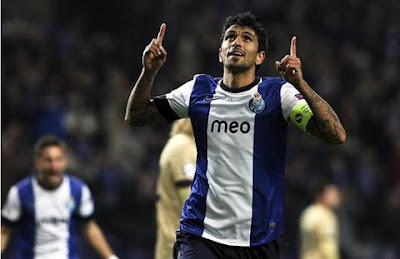 Lucho Gonzalez was beginning to look like a shadow of his former El Commandante-self at Marseille.

His midfield role was often very limited and very defensive. Basically reduced to making simple passes and maintaining rigid defensive midfield positioning behind the ball.  Any decisiveness coming from him was becoming increasingly rare and towards the end he wasn't even a certain starter anymore.

His move back to Porto then, where this natural leader is now captain once again, was godsend.

He immediately contributed positively, even had some decisiveness here and there, and was at least resembling the old Commandante playing his part in Porto overtaking Benfica for yet another championship.

Lucho is definitely slower these days which affect most things negatively, but being part of a fluid midfield where he and Moutinho play mostly in front of a defensive midfielder, he still provides great teamwork both with and without the ball. With the ball he provides quality one touch passing in the final third and in smaller spaces which functions very well with Moutinho and the dangerous attackers, then without it his defensive play is still disciplined, his physical capability still impressive and his attacking movement, if not dynamic anymore, remains clever and consistent enough to be a serious scoring or assist threat. His shooting of course also remains venomous.

I was somewhat late to the party but El Comandante is one of the players on the list who has risen the most in my estimation since the original list.

A very effective player with no weaknesses. He will contribute through disciplined defending using his stamina, strength and tactical awareness. And he has the technical skills to be a difference-maker on the attack. Just cause he isn't always flashy doesn't mean he can't be a playmaker. There is quality passing, commanding runs forward where he'll create space for himself to be a scoring threat (he has a great shot too) or for others.

This is an excellent player who helps his teams win every year, leading Porto to four consecutive championships (Benfica took over when he left) and then last season Marseille to their first championship since the days of Bernard Tapie.
Indsendt af Stefan kl. 22.22